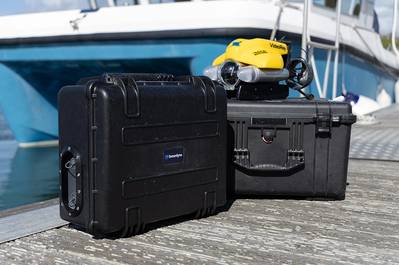 Sonardyne’s updated Micro-Ranger 2 USBL system contains everything needed to track divers, ROVS and AUVs in a rugged case small enough to operate-anywhere, from anything. Photo by Tom Acton/Sonardyne.

"Everything needed to start tracking divers, remotely operated vehicles, autonomous underwater vehicles or any other subsea targets is contained in a single, IP67-rated ruggedized case small enough to operate-anywhere, from anything," Sonardyne said.

The one-box USBL solution is able to track up to 10 targets out to 995 m. Inside the case is a Micro-Ranger Transceiver (MRT) with 10 m of cable, a GNSS antenna with 5 m of cable, and two Nano transponders and a command hub. A built-in battery provides more than 10 hours of continuous use, enough for a full day of activity out on the water. The case can also accept external power from a boat or shore supply, Sonardyne says.

"To get started, users simply have to connect their laptop running the Ranger 2 software to the case via Wi-Fi, put the MRT in the water, connect the antenna, and fit a Nano to each target. Sonardyne says even first-time operators can expect to be up and running in around 30 minutes," the company explains.

"Nano transponders are the perfect size and weight for divers, small towfish and micro ROVs. The two that come in the case are Sonardyne’s recently introduced second-generation model, offering extended battery life and depth rating. A connector-equipped Nano is also available allowing it to operate continuously via an external power source," the company said.

According to Sonardyne, the needs of AUV developers who need to both track and communicate with targets have been addressed with the Micro-Ranger 2 integrator system kit.

The integrator kit is suitable for AUV developers who want to trial their ideas and capabilities, including swarm capabilities, inshore before moving into deeper waters.