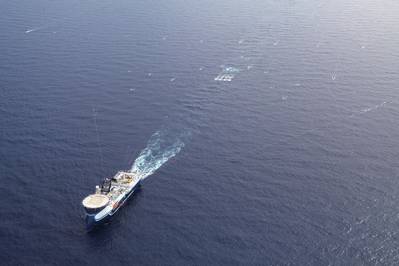 Attorneys general from nine U.S. states sued the Trump administration on Thursday to stop future seismic tests for oil and gas deposits off the East Coast, joining a lawsuit from environmentalists concerned the tests harm whales and dolphins.

Seismic testing uses air gun blasts to map out what resources lie beneath the ocean. Conservationists say the testing, a precursor to oil drilling, can disorient marine animals that rely on fine-tuned hearing to navigate and find food. The tests lead to beachings of an endangered species, the North Atlantic right whale, they say.

New York Attorney General Barbara Underwood said the tests would harm marine species, jeopardize coastal ecosystems and pose a "critical threat" to the natural resources, jobs and lives of New Yorkers. "The Trump administration has repeatedly put special interests before our environment and our communities," Underwood said in a statement.

The lawsuit, which names Commerce Secretary Wilbur Ross and the National Marine Fisheries Service as defendants, says the prospect of seeing marine mammals is an important draw for tourists to the states and helps coastal economies.

Last month the fisheries office of the National Oceanic and Atmospheric Administration, part of the Commerce Department, issued permits to WesternGeco LLC, a subsidiary of Schlumberger Ltd, and CGG to harass, but not kill, marine mammals with air gun blasts in a region of the Atlantic from Delaware to Cape Canaveral, Florida.

Jennie Lyons, a spokeswoman at the fisheries office declined to comment on the lawsuit but said the department only authorized harrasment, not outight killing, of the marine animals in issuing the permits. A marine biologist at the office told reporters last month that no seismic tests have been known to cause whale beachings.

The companies did not immediately respond to requests for comment.

The other attorneys general are from Maryland, Connecticut, Delaware, Maine, Massachusetts, New Jersey, North Carolina and Virginia. They joined a suit by conservationists filed earlier this month by groups including the Coastal Conservation League, the Natural Resources Defense Council and Oceana.