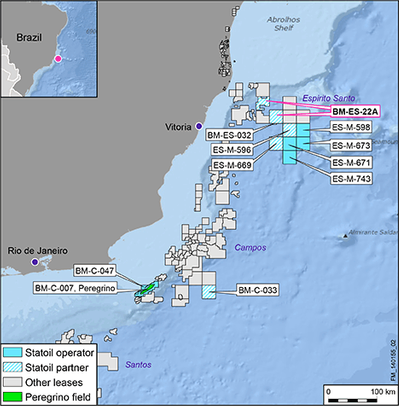 Statoil has received formal approval to enter the São Bernardo discovery in Espírito Santo. The discovery further strengthens Statoil's belief in the oil potential in the basin.

The concession contains the São Bernardo oil discovery made in April 2013. The discovery strengthens Statoil’s position in the basin and the view of its prospects.

Two reservoir levels with 34 – 36 API oil were proven by the well. The discovery is currently being appraised by the drilling of the Montanhês well.

“The São Bernardo discovery demonstrates that the Espírito Santo basin has an exciting oil potential and further confirms the established and new geological play model in the basin,” said Tim Dodson, executive vice president for Exploration in Statoil.

The strategy to enter into the BM-ES-22A concession was based on the result of the adjacent Indra discovery made in 2010.

In 2012 the Arjuna well was drilled as an appraisal of the Indra discovery and proved that this accumulation extends into BM-ES-22A, from the adjacent block BM-ES-32.

The well found an oil column of 200 meters, and a production test confirmed presence of a good quality reservoir with 29 API oil.

“With these discoveries and the 11th licensing round awards last year, Statoil has further deepened its position in this emerging oil play as we indicated at our capital market update in February. We are very well positioned for the upside,” Dodsoned.

BM-ES-22A comprises the two Blocks ES-M-468 and ES-M-527. Petrobras is the operator with 75% equity and Statoil holds a 25% share. It is located in the outer Espírito Santo basin and is partially adjacent to the BM-ES-32 concession where Statoil is partner.

“The new license is another building block for further value creation. We look forward to working closely together with the operator in the appraisal and further development of the asset," says André Leite, acting country manager for Statoil Brazil.

An appraisal plan for the São Bernardo discovery was approved by the ANP in January 2014. Statoil is also currently preparing for the acquisition of 3D seismic data, which is estimated to start during the second quarter of 2014 on the blocks awarded in the 11th Round.

In addition to a diverse exploration portfolio in Brazil, Statoil operates the Peregrino field in the Campos basin, which came on stream in April 2011.