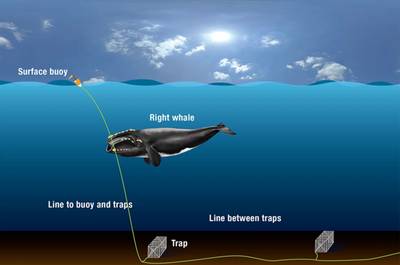 Entanglement in fishing gear is the leading cause of death for North Atlantic right whales—one of the most endangered of all the large whale species. Their migratory routes take them through some of the busiest commercial fishing areas along the East Coast of the United States and into Canada.
Entangled whales can tow fishing gear for tens to hundreds of miles over months or even years, before either being freed, shedding the gear on their own, or succumbing to their injuries.
In a paper published online Dec. 9, 2015, in Marine Mammal Science, a research team led by the Woods Hole Oceanographic Institution (WHOI), has for the first time quantified the amount of drag on entangled whales that is created by towing fishing gear, such as rope, buoys, and lobster and crab traps. The study provides important data for teams evaluating the risks and benefits of whale disentanglements.
"We know that entanglement can change a whale’s diving and swimming behavior and depletes their energy,” said Julie van der Hoop, lead author of the paper and a PhD Candidate in the MIT-WHOI Joint Program in Oceanography, “but the big thing we have never really known is what it must be like for animals to tow the gear. Is it like wearing an empty backpack or is that backpack overloaded with heavy books? Does removing part of the gear improve chances of survival? These are some of the questions that we were looking to answer with this research."
Working with colleagues from the Center for Coastal Studies and NOAA Fisheries, van der Hoop used a tensiometer to measure the drag forces on various types of fishing gear collected from past right whale entanglements. The team tested 16 sets of gear— five sets that included floats or buoys, one that included a two-brick lobster trap and 10 that were line only— towing  them behind the WHOI vessel R/V Tioga across a range of speeds and depths.
The team found considerable variation in drag created by the different sets of gear, with the presence of floats and buoys having  a significant effect on the overall drag created for the entangled animal.
"Some entanglements have very low drag, for example if a whale is towing 10 meters of rope, which is basically the length of the whale itself," van der Hoop said. "The weighted lobster trap created the most with three times the amount of natural drag on a whale's body. That's a huge increase in what is normal to these animals."
On average, the team found that entanglement increases the total body drag to 1.5 times that of a non-entangled whale. They also calculated the additional energy costs to the animal.
"Entangled animals have to spend twice as much energy to swim at the same speed," van der Hoop said, based on results from a separate study.
"This study significantly improves our understanding of the energetic cost of large whale entanglement drag forces. These persistent entanglement cases can be a very serious barrier to whales attempting to grow migrate and reproduce," added Michael Moore, a coauthor and van der Hoop's advisor. "The study also reinforces current disentanglement efforts to minimize entangling gear if it cannot be removed entirely."
The tests also allowed researchers to establish a relationship between drag and gear length, which will help in estimating the amount of drag on an entangled whale when it is first spotted. By reducing trailing line length by 75 percent, drag on the animal can be decreased by 85 percent.
This research is an expansion on an individual case study in 2013 of a two-year-old female North Atlantic right whale called Eg 3911, or Bayla, who was first sighted emaciated and entangled in fishing gear on Christmas Day 2010 near Jacksonville, Florida, by an aerial survey team.
Using a small, suction-cupped device called a Dtag to monitor the animal, van der Hoop, Moore, and colleagues from the Georgia Department of Natural Resources, the Florida Fish and Wildlife Conservation Commission, and NOAA Fisheries, showed for the first time how fishing lines impacted an individual, entangled whale.
Though disentanglement efforts by a rescue team eventually led to the removal of almost all of the gear after several attempts, Eg 3911 didn't survive. Her injuries were too severe to overcome. An aerial survey in February 2011 observed Eg 3911 dead at sea. A necropsy showed that effects of the chronic entanglement were the cause of death.
"We know that entanglement does more than just kill whales, and we know North Atlantic right whales aren't as healthy as right whales in the Southern Hemisphere," said coauthor Peter Corkeron, of NOAA Northeast Fisheries Science Center. "This work is a step towards quantifying just how entanglement is contributing to North Atlantic right whales' health problems."
This work was supported by grants from the M.S. Worthington Foundation, the Herrington-Fitch Family Foundation, and the Cooperative Institute for the North Atlantic Region. Van der Hoop was also supported by a Postgraduate Scholarship from the Natural Sciences and Engineering Research Council of Canada, and an MIT Martin Family for Sustainability Fellowship.
• Canada • Cooperative Institute • East Coast
Email