Humans have always been intrigued by what we do not know, especially that which we can’t see. At the time of writing, NASA’s Perseverance rover, fondly nicknamed Percy, has safely landed on Mars and sent over its first images of its Jezero Crater landing site. Percy, among many other technological creations, demonstrates the curiosity and capacity of our exploratory efforts. While our achievements in outer space exploration pile up, there is still much work to be done here on Earth—particularly in our oceans. To date, about 80% of the world’s oceans remain unexplored and only 7% are designated marine protected areas (MPAs). The depth of our oceans comes with many setbacks to “seeing” the deep sea in a traditional sense—zero visibility, freezing temperatures and crushing levels of pressure. But what about creating an auditory image?

During recent decades, progress in subsea exploration has increased significantly, especially with the advancement of underwater vehicles, whether autonomous, remotely operated, manned or otherwise. Sound has moved to the forefront of ocean exploration in past years thanks to its speed underwater—it travels almost five times faster than in the air. Audio samples can be caught with hydrophones that can pick up sounds from hundreds of miles away, whether they come from marine life, human interference or movement within the Earth’s surface. The information we gather from underwater acoustics can tell us much about the patterns and health of marine life, geological and physical characteristics of the seafloor, the impact of anthropogenic activities, future climatic conditions, and even play a role in GPS and navigation. The key to better understanding the deep sea, it seems, is sound.

While significant work has already been done to greatly advance our understanding of the ocean and marine ecosystems, there is still a desperate need for survey methods to monitor overall ecosystem health, believes Dr. Tzu-Hao Lin, assistant research fellow at Biodiversity Research Center, Academia Sinica in Taiwan. The cost of deploying autonomous sound recorders is significantly lower than visual-based systems. Dr. Lin, who is also in charge of the Marine Ecoacoustics and Informatics Lab, stated, “Soundscapes will play an important role in managing marine-related affairs as the techniques to recognize various biological, environmental, and anthropogenic sounds become more mature.”

Dr. Lin’s recent projects focus on the use of underwater sounds in remote sensing of marine ecosystem dynamics. The first investigated coral reef soundscapes in Okinawa, Japan, by deploying three autonomous sound recorders at depths ranging from 1.5m to 40m to cover shallow-water and mesophotic reefs. By using a computational approach that integrates machine learning and audio source separation, the researchers were able to unmix biological and anthropogenic sound sources and to visualize spatial and temporal occurrences of crustaceans and fish, as well as some shipping activities. “Our results reveal that although shallow-water coral reefs have high intensities of snapping shrimp sounds, mesophotic coral reefs contain a higher diversity of fish choruses than shallow-water coral reefs. In the meantime, they are more susceptible to noise generated from ferry and fishery activities,” Dr. Lin said.

The second project investigated acoustic diversity at the twilight zone by analyzing two and a half years of underwater recordings transmitted from a cabled seafloor observatory at a depth of 277m off the coast of northeastern Taiwan. The team’s computational approach allowed for the separation of single-channel audio into multiple channels that encode the behaviors of marine mammals, sound-producing fish, shipping activities and any mutual interactions. “The results,” Dr. Lin explained, “revealed that the studied continental shelf environment hosts a diverse array of sound-producing animals and that the community structure changes with diurnal, lunar and seasonal cycles.” 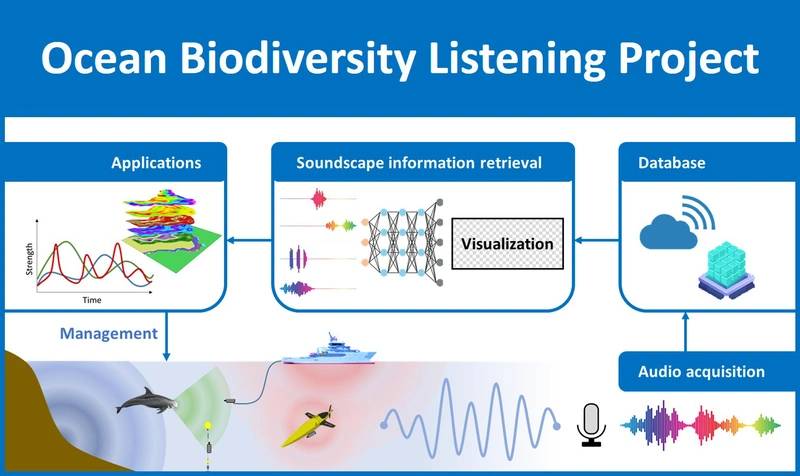 A conceptual figure illustrates the use of soundscapes in monitoring marine ecosystems. Underwater sounds will be digitally archived and available for the public use. Users can connect to the database and apply techniques of soundscape information retrieval to detect and classify various acoustic events. © Marine Ecoacoustics and Informatics Lab

Dr. Lin’s work is among many that highlights the importance of underwater acoustic research for better understanding the depths of our oceans and that would not be possible without technological advances. In some cases, for his work, the team gathers audio data from cabled observatories, like the one off the northeastern coast of Taiwan, which are designed to monitor deep-sea environments. Otherwise, Dr. Lin shared, they use standalone autonomous recorders like the SoundTrap 300, designed by New Zealand-based Ocean Instruments. When it comes to analysis, Dr. Lin’s computational approach automatically separates “anthropogenic noise from biological sounds, thus improving the diversity assessment of sound-producing animals and noise-generating activities.”

For some, the main goal is making it easier to distinguish between individual sounds in noisy underwater soundscapes from the outset. Woods Hole Oceanographic Institute scientist Dr. Ying-Tsong Lin and his team are building the first ever underwater 3D “acoustic telescope,” a 30-foot diameter, six-armed array of hydrophones. The star-shaped “telescope” will be capable of tuning in sounds from thousands of miles away and isolating them from other background acoustic sources. In addition, the instrument will be equipped with satellite communication for real-time data transmission. This technology will enable scientists to gain a more nuanced and holistic view of the underwater soundscape, taking the complexity of ocean sound sources into account. Once fully constructed, the “telescope” will be deployed at the edge of the continental shelf off the Northeast coast of the United States; the ultimate goal is an array of “acoustic telescopes” to capture the 3D soundscape of entire ocean basins.

Unsurprisingly, as with any success story, there are still challenges to face and surmount. For Dr. Lin of Academia Sinica, insufficient information on the acoustic behavior of marine animals is a major hindrance. In his second project, mentioned previously, two new types of fish choruses were discovered in the continental shelf environment; however, the team still cannot identify the species despite knowing their diurnal and seasonal occurrence patterns. The solution? “An audio library for various sound-producing marine organisms,” Dr. Lin said. Such a library is critical for promoting the use of soundscape analysis in ecosystem assessment, as well as for developing sound recognition software that can recognize species and their unique behaviors.

This idea is already being pursued via The Ocean Biodiversity Listening Project (OBLP), which “aims to establish a large-scale soundscape monitoring network (using autonomous sound recorders or cabled observatories) to cover various marine ecosystems.” The goal, Dr. Lin explained, “is to identify sounds of geophonic, biological and anthropogenic sources from soundscapes so that we can transform acoustic data into metrics that describe the ecosystem health, biodiversity, human activities, as well as their mutual interactions.” He believes that OBLP will allow managers and stakeholders to efficiently monitor marine ecosystem trends and perform data-driven decision making in conservation management.

Underwater acoustics, while excellent at painting an auditory map of the deep sea, can also paint a spatial one. Since GPS doesn’t work well underwater, as radio waves break down in liquids, scientists rely on acoustic signaling for locating undersea objects like drones or animals. Motivated by the massive amount of oceanic territory that remains unexplored, researchers at MIT have developed a battery-free pinpointing system called Underwater Backscatter Localization (UBL). When asked to explain the technology, the scientists used the example of an underwater drone trying to determine its location to navigate. With UBL, the drone generates an acoustic signal or some sort of underwater sound, which “then travels and hits one of our battery-free beacons, reflects and comes back. The drone can measure the time it takes the signal to go, reflect and come back to measure the distance.”

Underwater acoustics play another important role, aside from helping determine distance. The battery-free beacons, which employ piezoelectric materials, power up by harvesting energy from sound. To do so, the researchers explained, “Our node leverages a piezoceramic unit that is efficiently designed to convert the acoustic energy to electricity.” Piezoelectric materials, which are used to both harvest energy and reflect acoustic signals, are key in overcoming the previous challenge of power-hungry tracking devices and deploying underwater GPS. With the ability to easily navigate underwater, scientists can boost ocean exploration. “We can furthermore use this technology for various other applications such as climatographic studies, underwater mining and asset management among others,” MIT’s research team said. 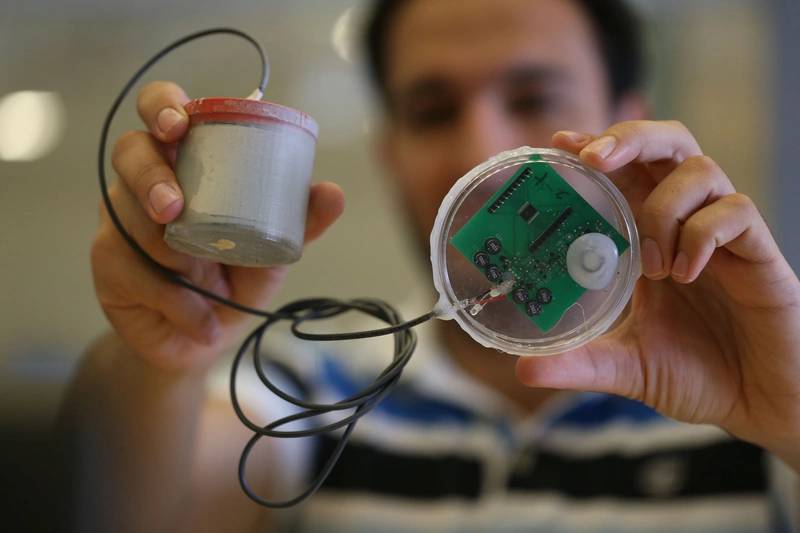 The Beat Goes On

The future of underwater acoustics is an important one, as Dr. Lin expressed: “Since soundscapes can tell us so many things from the recording site, I believe that underwater acoustics will be an indispensable component for the future development of marine monitoring networks.” The implications are plentiful and crucial to ecosystem management, whether through analyzing acoustic soundscapes to identify marine life patterns or safely and confidently deploying underwater drones to collect samples. Technological advancements, coupled with our natural curiosity and drive to explore the unknown, will give way to wonderful discoveries in the coming years.

If Percy’s recent success represents humanity’s latest interplanetary achievement, the exploration potential achieved on Earth with underwater acoustics is as bottomless as the deep seafloor. 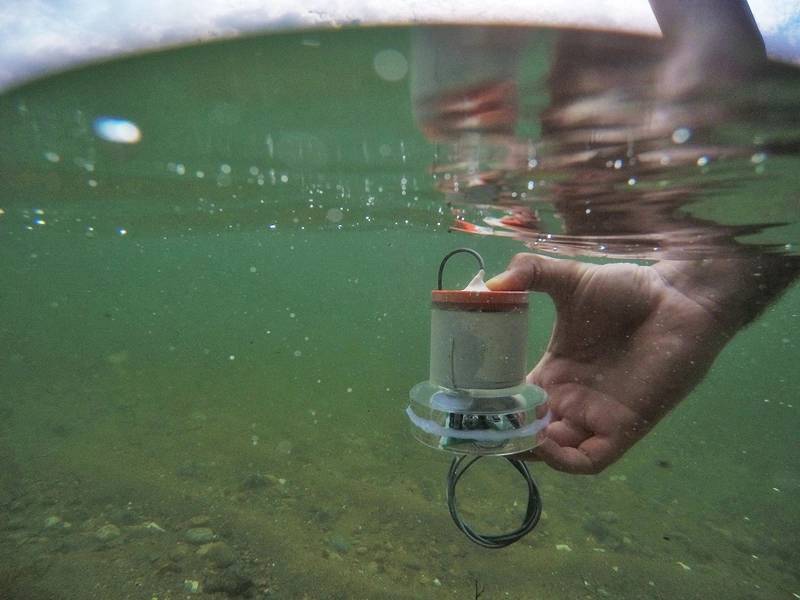 
(Published in the March/April 2021 edition of Marine Technology Reporter)