Survey Vessel Launched for Geo Plus 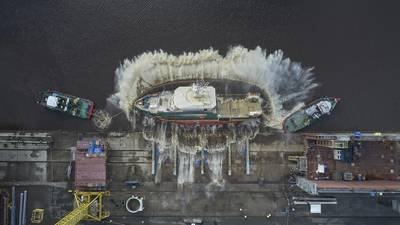 Dutch shipbuilder Royal Niestern Sander said it has launched a new vessel currently under construction for hydrographic survey firm Geo Plus BV. The newbuild, to be named Geo Ranger, is due to be christened and delivered this summer.

The contract for the construction of the hydrographic research vessel Geo Ranger was signed by the builder and Geo Plus in April 2019.

After the start of construction in September 2019, the ship was transported in early February from the construction hall to the quay side to prepare for the launch, which took place on March 7.

The ship (yard number 864) was designed together with Conoship International BV and will be rented out to parties that perform research, such as dredging companies and companies that build and maintain offshore wind farms.