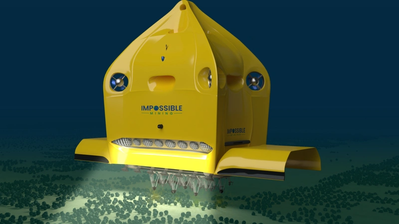 Impossible Mining, a company developing sustainable seabed mining technology, has said it has partnered up with the Dutch marine services company Boskalis to explore the integration of its robotics with vessel operations for selective harvesting of nodules in the Cook Islands, in the South Pacific Ocean.

In November 2021, Impossible Mining, which describes itself as a public benefits corporation based in Silicon Valley,  said it was developing the technology to mine the seabed without causing serious harm. It said at the time it had secured funding to develop prototypes of an autonomous robotics collection system and a carbon-neutral, non-toxic, metals refinery system.

“Impossible Mining is planning to use 21st-century technology, robotics, computer vision, autonomy and artificial intelligence to selectively harvest polymetallic nodules from the deep-sea floor, in a way that preserves the seafloor habitat and does not cause widespread impacts or habitat destruction,” said Oliver Gunasekara, CEO and Co-Founder of Impossible Mining, said at the time.

Commenting on the partnership with Boskalis, Gunasekara said: "We are showing the world that a nimble innovator like Impossible Mining can make big changes in the mining industry. By partnering with global leaders like Boskalis, we are paving the way to widespread uptake of our technology that will disrupt the mining industry on both land and underwater - making it more sustainable, more economic, and more secure,” said Oliver

“At Boskalis, we know that innovation and disruption are critical to the growth of our company. We are excited to work with Impossible Mining as they develop a transformational approach to sustainable seabed mining,” said Sander Steenbrink, General Manager Corporate Innovation, Research & Development at Boskalis.

“Demonstrating that our robotics manipulator can deliver the throughput required for economic production, while also preserving the seafloor ecosystem, answers the major question our competitors raise about the viability of selective harvesting. We are well on the way to showing that no longer does mineral production have to come at the cost of sustainability,” said Renee Grogan, Chief Sustainability Officer & Co-Founder of Impossible Mining.

Offshore Engineer reached out to Boskalis, seeking info on the expected deployment of vessels and Impossible Mining's system.

A Boskalis spokesperson said:"Impossible Mining (IM) is developing a concept for autonomous robotic collection for selective harvesting of polymetallic nodules. Our partnership with IM is about providing feedback on their system and the possible integration with Boskalis vessels. Since the development is in a very early, exploratory phase, it is not known when such a system may be deployed."