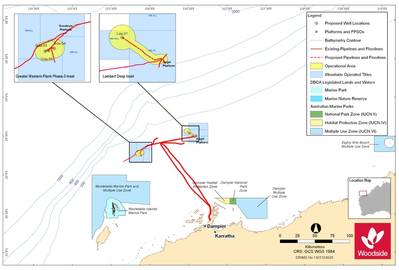 Services company TechnipFMC said it has been awarded an engineering, procurement, construction and installation (EPCI) contract from Australia's Woodside for the development of the Lambert Deep and Phase 3 of the Greater Western Flank fields, located offshore Northwestern Australia.

TechnipFMC called the contract “significant”, worth between $75 million and $250 million.

TechnipFMC will design, manufacture, deliver and install subsea equipment including subsea production system, flexible flowlines and umbilicals for connection to the Angel platform, located about 120 kilometers northwest of Karratha and connected to the North Rankin Complex (NRC) via a 50-kilometer subsea pipeline..

The contract is the second under a five-year integrated EPCI (iEPCI) frame agreement between TechnipFMC and Woodside.