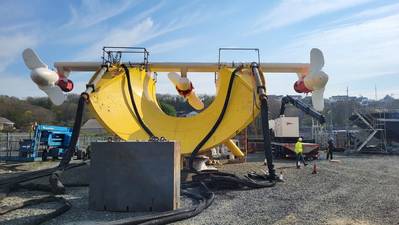 As the project moves into a new tranche of funding from the Swansea Bay City Deal, part of the Pembroke Dock Marine Project, one of the key objectives is broadening the testing capabilities for the open water sites to meet the needs of the evolving industry and wider blue economy, META said.

"Working with a local team from leading environmental consultancy, Marine Space, to secure the license, META clients will now be able to test component parts at greater speeds and tidal device configurations with 3 turbine rotors – a design pathway many developers are following," META added.

Improvements to the facility have also been granted above the water to allow larger surface infrastructure to support device testing.

Saul Young, META Operations Manager, said:"We have expanded the consented parameters for the META scale tidal stream and wave energy sites to facilitate the needs of technology developers who would like to test at META. It is our aim to keep developing the test site in line with industry requirements and continue to build a hub for marine energy research and innovation in Wales.”