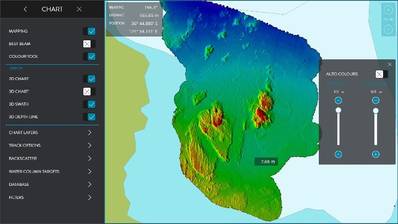 WASSP Multibeam has announced the release of two new firmware updates, CDX 4.0 and DRX 6.0, for its S Series multibeam sonar systems designed for the survey market, including dredging, dive site profiling, wreck hunting and many other survey activities.

These updates will add a number of new functions to WASSP systems currently in use and, in most cases, can be installed by the user free-of-charge.

A new Compensation Control adjusts for sea temperature and salinity, ensuring that the seafloor remains flat irrespective of different absorption losses in the water column.

Whether using CDX or a third-party Hydro Survey software suite, the firmware update will include, the new Volumetric Strength option, added to the existing Target Strength mode, enables concentration on seafloor targets whilst filtering out smaller water column targets.

A greatly improved mapping algorithm significantly enhances mapping and tracking in shallow waters with a depth of less than 5m. A new Multiresolution Database with automatic, depth-adjustment, best resolution mapping which can be used in all depths and to which existing databases can be uploaded.

GSF data can now be exported including backscatter data (with relevant licenses) and a greatly improved mapping algorithm to reduce Roll errors by using best data, both new and historic.