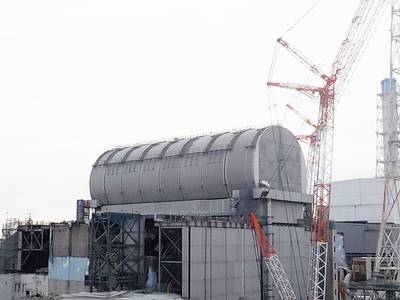 The owner of the Fukushima nuclear plant, destroyed by an earthquake and tsunami more than seven years ago, said water treated at the site still contains radioactive materials that for years it has insisted had been removed.

The admission by Tokyo Electric Power (Tepco) could ruin its chances of releasing the water into the ocean, a move the nuclear regulator says is safe but which local fishermen oppose.

Tokyo won the bid to host the 2020 Summer Olympics more than five years ago, with Prime Minister Shinzo Abe declaring that Fukushima was "under control" in his final pitch to the International Olympic Committee.

Tepco apologized to the committee under the Ministry of Economy, Trade and Industry, which is looking into ways to dispose of the water.

A spokesman at Tepco confirmed the findings and the apology.

A 9.0-magnitude quake and tsunami in March 2011 triggered meltdowns at three of the Fukushima Daiichi plant's six reactors, spewing radiation into the air, soil and ocean and forcing 160,000 residents to flee, many of whom have not returned.

It was the world's worst nuclear disaster since Chernobyl 25 years earlier.

Hundreds of deaths have been attributed to the chaos of evacuations during the crisis and to the hardship and trauma refugees have experienced since then, but the government only last month acknowledged for the first time that one worker at the plant had died from radiation exposure.

Documents on the government committee's website show that of 890,000 tonnes of water held at Fukushima, 750,000 tonnes, or 84 percent, contain higher concentrations of radioactive materials than legal limits allow.

In 65,000 tonnes of treated water, the levels of radioactive materials are more than 100 times government safety levels.

Radioactive readings of one of those isotopes, strontium-90, considered dangerous to human health, were detected at 600,000 becquerels per litre in some tanks, 20,000 times the legal limit.

Tepco has for years insisted that its purification processes remove strontium and 61 other radioactive elements from the contaminated water but leaves tritium, a mildly radioactive element that is difficult to separate from water.

"We will filter the water in the tanks one more time to bring the levels to below regulatory limits before release into the ocean if a decision is made to do so," the Tepco spokesman said.

The water build-up has come about because Tepco must pour water over the three reactors to keep the melted uranium fuel at a safe temperature.

Groundwater flowing from the hills above the plant enters the reactor basements, where it mixes with highly radioactive debris. That gets pumped out and treated before being stored in tanks that are fast filling up.

And a costly "ice wall" is failing to keep groundwater from entering the basements, a Reuters analysis of the Tepco data showed earlier this year.

The groundwater seepage has delayed Tepco's clean-up and may undermine the entire decommissioning process.

Nearby residents, particularly fishermen, oppose ocean releases of the treated water because they fear it will keep consumers from buying Fukushima products.

Many countries, including South Korea and China, still have restrictions on produce from Fukushima and neighboring areas.