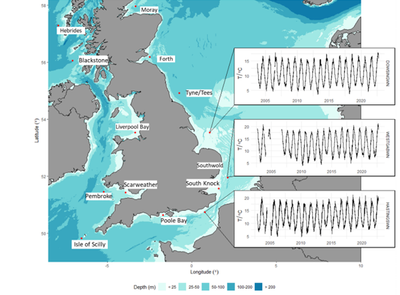 The data provided by WaveNet shows that sites in Tyne/Tees (off the Yorkshire coast), Dowsing, Southwold, Gabbard (in the southern North sea), South Knock (Thames estuary) and Hastings (in the English Channel) and around to Poole Bay in the Western Channel have reached new highs. In the southern North Sea, temperatures were above 20 degrees for several weeks and reached 21 degrees at South Knock beating the last 20 years of data previously collected.

While these waters are typically the warmest in the UK, the rise is likely to be the result of an extremely warm summer, particularly in the south and east of England. Across the rest of the UK, temperatures at sites such as Liverpool Bay, Morray Firth, Hebrides, and The Forth, have all reached above average levels.

Established in 2002, WaveNet, hosted by Cefas, provides real time wave heights and temperatures from a network of wave buoys located around the UK coastline. The data, collected from a variety of third party platforms and programs (industry and public sector-funded), gives an unprecedented insight into the changing sea wave climate and temperature around the U.K.

Warmer seas are recognized as a potential impact of climate change and are also associated with changes to the marine environment and biodiversity. Existing Cefas research shows that warmer seas are already having an impact on the movement and behavior of fish stock across the U.K. Biologically, warmer sea water contains less oxygen, threatening marine habitats and larger fish species.

It is projected that U.K. sea water temperatures will continue to rise over the coming century, with models suggesting an increase of between 0.25°C and 0.4°C per decade. The WaveNet data, which is incorporated into Met Office meteorological models, will help forecasters, local authorities, and scientists to better understand the risks and impacts of climate change on the marine environment and coastal communities.