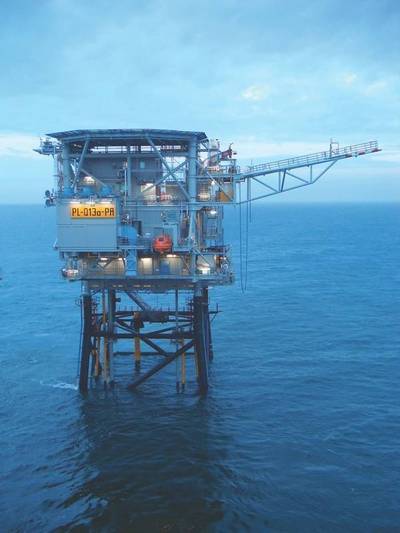 Neptune Energy’s Q13a platform, set to be home to a hydrogen production facility under the pilot project. (Photo: Neptune Energy)

Oil and gas firm Neptune Energy has informed that another partner - Eneco - has joined the PosHYdon pilot, the world’s first offshore green hydrogen project, being developed in the Dutch North Sea.

PosHYdon integrates three energy systems in the Dutch North Sea: offshore wind, offshore gas, and offshore hydrogen and will involve the installation of the hydrogen-producing plant on the Neptune-operated Q13a offshore platform. The plan is for the plant to convert electricity generated by offshore wind farms into hydrogen.

As a partner, Eneco will supply simulated wind data from its offshore wind farm, Luchterduinen, to support the project.

The data will be used to accurately model the use of electricity generated by the wind farm to power the electrolysis process on the Neptune-operated Q13a platform, using seawater. The seawater is demineralized on the platform in order to produce hydrogen

Lex de Groot, Managing Director of Neptune Energy in the Netherlands, said: “We are very pleased to welcome Eneco onboard as a partner. Their participation will provide realistic data for the pilot, which in turn delivers better insights for the next stages of the project.

“The goal is to obtain valuable lessons for successfully integrating offshore energy systems to support the acceleration of the energy transition, and the Dutch North Sea is ideally suited for this. The ability to convert energy from wind farms to hydrogen, then transport it via the existing gas infrastructure offers major advantages, particularly for those windfarms located much further offshore.”

Ruben Dijkstra, Director Offshore Wind for Eneco added: “Hydrogen is important for achieving the climate objectives to support sectors such as industry, the built environment, and transport in their sustainability. With the possibilities of offshore wind and the enormous potential that the North Sea still offers, hydrogen production in the North Sea is an important element in the energy transition.

“Eneco gladly supports the steps being taken in this direction with the PosHYdon pilot. In addition to the technical aspect of offshore electrolysis, Eneco also has a strong interest in developing green hydrogen certificates and adding hydrogen to the natural gas network. ”

PosHYdon is an initiative of Nexstep, the Dutch association for decommissioning and reuse, and TNO, the Netherlands organization for applied scientific research, in close collaboration with the industry.

Eneco is the latest partner to join the pilot, following Neptune’s announcement earlier this month regarding Gasunie, Noordgastransport BV and NOGAT BV. Partners in the Q13a-A platform are: EBN B.V. (40%) and TAQA Offshore B.V. (10%).