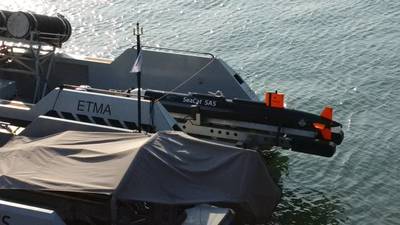 SeaCat is an approximately 3 meters long and 280kg (depending on configuration) mid-size, modular, hybrid AUV that provides remotely operated vehicle (ROV) and AUV capabilities "as a truck" to the operating theatre. SeaCat has been fully certified and qualified and thus fulfils the important military (MIL-STD) and commercial (IHO S-44 special order, battery according to UN38.3) standards. In addition to the basic sidescan sensor suite SeaCat is now available with Kraken's AquaPix MINSAS for applications like minehunting or seabed boulder counting. In combination with its unique SwapHead (open interface) mission bay, SeaCat can be equipped with a broad spectrum of sensors like multi-beam, camera, light, sub-bottom profiler, magnetometer, etc. To enhance maneuverability and range SeaCat is configurable with different thruster-sections and extended range modules (up to 20 hours autonomy). With a price of below 1 Million Euro for an initial SeaCat system it features an affordable, efficient and capable AUV system for shore-based, RHIB, USV and ship deployments.

Tim Kraemer, ATLAS Head of Business Line AUV, stated during the contract signature that he was very pleased that such a well performing SAS sensor has been identified for SeaCat AUV. The AquaPix MINSAS is committed to the same product philosophy in terms of quality, performance and price value proposition as the SeaCat AUV.

Karl Kenny, Kraken President and CEO said, "Atlas has a long history when it comes to providing naval systems and maritime technologies to international customers. The company's outstanding products include mine-countermeasure systems, sonar systems, command and control systems, and unmanned underwater vehicles (UUVS). Atlas has already sold over 3,000 UUVs to customers worldwide. Their dedication to underwater drone activities entails a deep knowledge of key technologies such as hydrodynamics, navigation, guidance and control, communication, sensors, software and system management that they have gained since the 1970s. We are very pleased to equip their SeaCat AUV with our AquaPix system and look forward to continued growth."