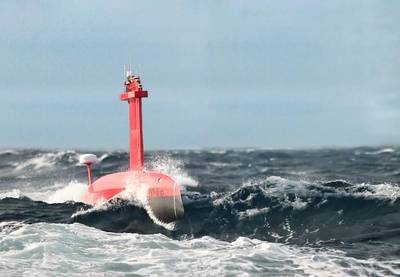 Bureau Veritas (BV) delivered an Approval in Principle (AiP) to iXblue for its Unmanned Surface Vessel (USV) DriX, an AiP that addresses the safety requirements of the marine drone, which operates under the novel concept of remotely supervised autonomy.

With a length of 8m, DriX is an Unmanned Surface Vehicle (USV) equipped with advanced perception means, including a radar, a lidar and cameras, as well as artificial intelligence, which enable it to adapt to its environment, avoid obstacles and carry out missions autonomously.

Designed to support hydrographic and geophysical surveys, water column analysis and subsea positioning operations, DriX has been used by major hydrographic institutes and energy companies worldwide.
Developed by iXblue, DriX has been certified by BV for its system architecture, its operational envelope, its construction (Malta Cross certificate for the hull), as well as its autonomy functions. The NI641 “Guidelines for Autonomous shipping” have provided a framework for a thorough analysis of the DriX architecture and its critical functions in a way that is adapted to autonomous marine systems.

To support the Approval in Principle, Bureau Veritas Solutions Marine & Offshore (BV Solutions M&O) conducted a Hazard Identification (HAZID) study, as required by BV NI641. This HAZID study identified and assessed the hazards of Maritime Autonomous Surface Ships (MASS) when unmanned, taking into account the level of automation, direct and remote control, autonomy, area of operation and vessel type and design. BV Solutions M&O also conducted a Failure Mode Effects and Criticality Analysis (FMECA) on critical components previously identified during the HAZID study in order to identify, evaluate and mitigate the effects of essential equipment failure and to improve the reliability of automation systems associated with essential services