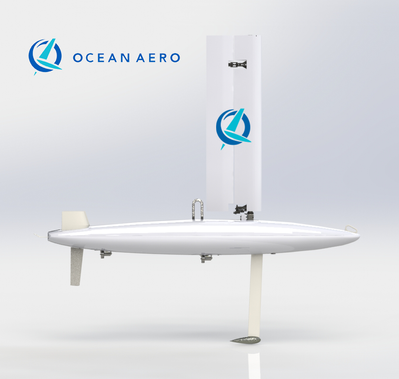 “Harmful Algal Blooms can cause severe environmental, economic, and societal damage, and the water sampling system we are developing with the University of Washington Applied Physics Laboratory (UWAPL) increases the ability to detect and mitigate the effects of HABs,” said Neil Trenaman, Executive Vice President of Strategic Business Development at Ocean Aero. “NOAA, IOOS, and the other partners in this program are demonstrating scientific leadership by incorporating intelligent autonomy into its efforts.”

Unlike vessel-based sampling that is often hampered by rough weather conditions common during seasons when HABs are of the greatest concern—namely the early spring and the fall—Ocean Aero’s Triton can survive extreme ocean conditions and operate in sea states of up to 15 feet with 30 knot winds. The Triton can conduct sampling when smaller human-operated vessels can’t sample. The Triton also is wind and solar powered and has a significantly-reduced carbon footprint than conventional sampling methods.

“Collecting offshore HAB samples in critical HAB source regions has always been challenging due to the remoteness of these regions and because of typically-inclement weather in HAB seasons,” said John Mickett, Project Lead at UWAPL. “We are hopeful that the Triton will largely overcome these issues to provide invaluable HAB samples that will significantly improve HAB monitoring and forecasts in the Pacific Northwest.”

With the ability to travel at an average speed of 2-3 knots, the Triton will be launched from a marina, travel offshore for roughly 12-24 hours (~40-70 kilometers), and then return to port collecting up to 10-15 georeferenced, time-stamped water samples at designated waypoints along the way. Once ashore, the samples will be rapidly analyzed for HAB species types and cell concentrations as well as toxin (domoic acid) concentrations. Processing will be completed within ~24-30 hours of the first sample collected, with the results transferred to an online data display developed by NANOOS on the HABs website.

“NANOOS will aid the project to assure that end-user groups can access the data and information for informed decisions,” said Jan Newton, NANOOS Executive Director.

The improved offshore HAB sampling by the Ocean Aero Triton will provide valuable measurements to the Pacific Northwest (PNW) HAB Bulletin, ground-truthing HAB forecasts, significantly enhancing HAB forecast accuracy, and providing essential measurements of toxin concentration—which presently cannot be modeled with skill. Additionally, for several days to a week following the deployments, the rapid measurements will act as an early warning system, allowing the detection (within 36 hours of sampling) of offshore HABs and toxins prior to them reaching inshore areas where there is increased risk to human health and fisheries. Both of these results will significantly reduce the risk and the economic impacts of HABs in the Pacific Northwest.

This project will rely heavily on existing partnerships to carry out the proposed deployments, including NANOOS, which is the Pacific Northwest IOOS Regional Association, the Olympic Regional Harmful Algal Bloom (ORHAB) Partnership, the Oregon State University (OSU)-NOAA (CIMRS) partnership and collaboration with the Oregon Department of Fish and Wildlife. This approach will both ensure close integration with existing HAB monitoring efforts and will facilitate the transition to long-term operations.

NOAA's New Ocean Exploration Ship to Be Based in Newport, RI

Newport, R.I. has been chosen as the future homeport for a new NOAA oceanographic research vessel being built for the agency.