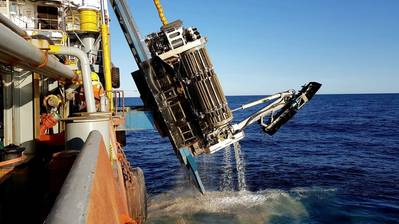 Offshore geotechnical services company Benthic will be deploying a remotely operated seabed drilling system off Brazil, as part of a contract awarded by the Brazilian national oil company Petrobras.

Petrobras has hired Benthic to carry out geotechnical site investigation services at the giant Mero field located in the Santos Basin, which the company is developing in phases.

Benthic, part of the Acteon Group, will utilize its PROD3 seabed drilling and geotechnical testing system, a portable remotely operated drill that can switch between piston sampling and rotary coring to maximize productivity.

According to Benthic, the PROD3 is up to five times more productive than a drillship in water depths of more than 500 meters.

“This contract follows a recent sequence of successful projects and reaffirms our commitment and working relationship with Petrobras in Brazil,” said Fabio Pereira, Benthic’s country manager for Brazil. “This is a key international market for Benthic and the subsea service industry in general.”

As previously reported, Petrobras and its partners earlier this week made the investment decision for the third phase of the Mero project, located.180 kilometers off the coast of Rio de Janeiro, in the prolific pre-salt area of the Santos Basin, and signed a letter of intent for what will be the fourth FPSO deployed at the Mero field.

The Mero 3 project will include an FPSO with a liquid treatment capacity of 180,000 barrels per day. The FPSO is expected to start production by 2024.