The Blowfish Project: ROV Helps to Secure US Waterways 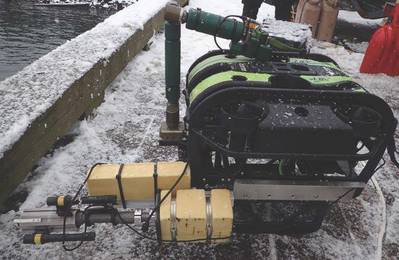 “The system will provide separation between Explosive Ordnance Disposal (EOD) operators and underwater explosive threat hazards, while they mitigate the effects of those threats, without causing collateral damage to surrounding vessels and infrastructure,” said U.S. Navy Lt. Cmdr. Michael Bailey, program integrator for Counter Improvised Threat Technologies Department. “Progress has enabled components of the Blowfish system to be integrated into a new ROV—the VideoRay Defender—which is destined to be part of a family of U.S. Navy EOD response vehicles.”

Blowfish development began in 2016, with significant progress achieved in 2018. The project originated as a Maritime Homeland Defense and OCONUS capability and in DTRA terms, is on track to serve as an Innovative Capability Solution. The technology is slated to become part of a System-of-Systems approach employed by USN EOD Expeditionary Mine Countermeasures forces in their wide-ranging maritime missions around the globe.

According to Bailey, Blowfish developments include the successful integration of a lightweight manipulator arm onto a modified Teledyne SeaBotix vLBV 300 ROV, with state-of-the-art navigation package, the SeeByte CoPilot. The system also integrates a fielded EOD TiTAN disruptor tool modified for maritime use to deliver a low-collateral damage effect that will neutralize an underwater threat.

“We anticipate the Blowfish project being fully integrated and demonstrated to U.S. Naval EOD users in late 2020,” according to the program integrator. “U.S. Navy transition partners will determine when and to what extent the technology will be integrated into the EOD Response Vehicles,” stated Bailey.

Blowfish recently demonstrated its capabilities during the Joint Exercise Arctic Edge 2020 in Juneau, Alaska in February 2020. During the exercise, Blowfish engaged the system’s underwater neutralization disruptor against surrogate underwater explosive threat targets. Initial integration with the VideoRay ROV were impressive. The system demonstrated 100% success in seven disruption attempts on varied target types. The system functioned as expected despite the frigid air and water temperatures.