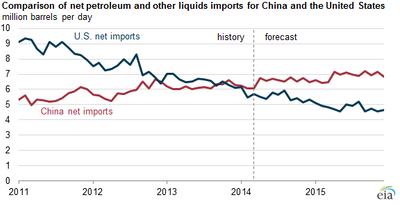 U.S. total annual petroleum and other liquids production is expected to rise 31% between 2011 and 2014 to 13.3 million barrels per day, primarily from tight oil plays. In the meantime, Chinese production will increase at a much lower rate (5% over this period) and is forecast to be only a third of U.S. production in 2014.

China has been diversifying the sources of its crude oil imports in recent years as a result of robust oil demand growth and recent geopolitical uncertainties. Saudi Arabia continues to be the largest supplier of crude oil to China and in 2013 provided 19% of China's 5.6 million barrels per day. Because production levels from Iran, Libya, and Sudan and South Sudan dropped since 2011, China replaced the lost shares of crude oil and other liquids imports from these countries with imports from Oman, Iraq, the United Arab Emirates, Angola, Venezuela, and Russia.