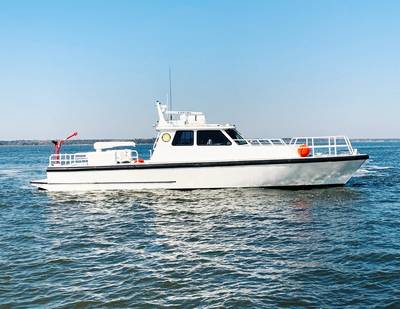 A refurbished 48-foot workboat has been delivered to The University of Southern Mississippi (USM) for its second life as a research vessel.

The vessel, an Endeavor 45 cabin patrol vessel originally built by Silver Ships in 2008 for the State of Mississippi Department of Marine Resources (DMR), returned to the Theodore, Ala. shipyard for the transformation. The vessel is now capable of supporting the USM School of Ocean Science and Engineering’s deep ocean underwater surveys using various uncrewed underwater vehicle systems. The new and improved vessel will conduct testing, maritime research and underwater surveys in the Gulf of Mexico for various private and governmental partners.

“This project was almost two years in the making and began with several meetings with USM to develop the project scope and produce an engineering plan. We conducted a stability study of the vessel to determine cargo payload and how the hull would need to be modified to support the University’s offshore mission,” Lobree said.

The hull was extended by three feet aft, with added tie-downs on the aft deck, and the vessel's swim/dive platform was improved while removable railings were added over the transom. Key additions include a 1,000 lb. lift crane, 850 lb. davit, retractable awning over aft deck and Zipwake dynamic trim control system. The vessel's generator, radar and multifunction display were replaced along with its life raft and firefighting equipment. Among other updates, the waterjets were repaired and Cummins QSM11 inboard diesel powertrain was aligned, and the entire exterior and bottom of the vessel was blasted and painted.

“USM was very involved with every design and outfitting detail and the spirit of teamwork with the university has been fantastic. This refurbishment has helped to extend the life of this vessel for many more years of service,” Lobree said.

Dr. Kelly Lucas, USM Associate Vice President for Research, Coastal Operations, said, “USM and Silver Ships staff have enjoyed a great relationship through design and execution of the modifications and refurbishing process. We are delighted to add this vessel to our research fleet to assist us in launching and recovery for uncrewed systems while enabling scientists a platform to monitor performance and conduct testing and evaluation.”

Known primarily as a builder of aluminum vessels, Silver Ships also offers refurbishment services. According to the shipyard, approximately 15% of its workload consists of refurbishment projects, which typically serve to modernize workboats and extend their service life through major overhauls.