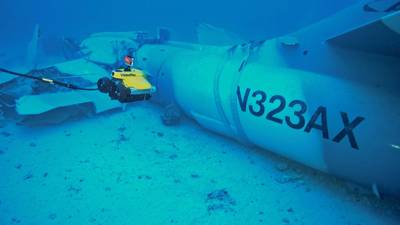 The privately owned Hawker Hunter aircraft crashed on December 12, 2018 while participating in the Hawaii Air National Guard sponsored training exercise Sentry Aloha. The pilot ejected before the crash and was rescued by the Coast Guard with the assistance of nearby good Samaritans, but the plane was sent crashing into the ocean.

The aicraft hit the water about 1 mile south of Honolulu in an area with many small boats. The number of boats in the area meant there were many cellphone videos, making the general location of the plane easier to pinpoint.

An extensive sidescan sonar mission, lasting several days, had identified 75 potential targets on a seabed littered with old debris from years of dumping. Van Meter studied these targets and identified the one that had a very high probability of marking the aircraft.

Once on the water, the team made quick work of locating the downed aircraft despite 4- to 6-foot swells and winds of 10-15 miles per hour at the surface. Due to these conditions the boat could not be anchored, and the crew was required to live-boat, while Van Meter navigated his ROV underwater.

Still, the entire in-water mission to locate and identify the wreckage took 30 minutes after setting up. Using his VideoRay Pro 4 ROV, Van Meter located the fighter jet in about 245 feet of water on December 30, 2018.

"The plan for the mission was five to seven days," Van Meter said. "The VideoRay made it possible to mobilize quickly and fly to Honolulu with everything I needed. We could setup rapidly on the boat, and use power supplied by a small Honda generator. Due to size and weight of the Pro 4, I was able to use a deck hand as a tether manager after a few minutes of training."

After analyzing the data from the ROV, the salvor consulted with an engineer, formulated a plan, and received concurrence from the U.S. Coast Guard to proceed. Using the ROV, the salvage company lassoed the tail of the aircraft wreckage with line and slowly raised it to the surface. The team towed the section to a haul-out point designated by the State’s Department of Land and Natural Resources Division of Boating and Ocean Recreation Division. Following the section’s removal from the water, it was transported by truck to Marine Corps Base Hawaii, where the NTSB will continue its investigation into the cause of the crash.

“Using a blend of local salvage assets, remote engineering guidance, and advanced sensing technology sourced from the mainland, the locally based salvage company Parker Marine Corporation has completed the next stage of the aircraft salvage,” said Chief Warrant Officer Russ Strathern, a marine safety specialist, and response officer at Sector Honolulu, on January 9. “The main section of the fuselage containing residual oil and potentially hazardous substances has been salvaged and transported to a staging location for the ongoing National Transportation Safety Board led investigation.”

Strathern added, “Because of the incident complexity and operational environment, this evolution was technically challenging. The aircraft owners worked tirelessly with the salvor and jurisdictional authorities to safely mitigate the threat to the public and environment, all while preserving evidence critical to future root-cause analyses. I’m pleased to note that there were no reported injuries after the initial accident or impacts to wildlife, these are great measures of success, and indicative of the hard work of the involved parties.”

Throughout the operation, the Coast Guard worked closely with representatives from the Hawaii State Department of Health Hazard Evaluation and Emergency Response and Department of Land and Natural Resources offices to monitor the salvage and recovery efforts.

“With the removal of this section, which contained the aircraft’s engine, any oil or hazardous substances from the aircraft has either been removed or naturally dissipated and the remaining pieces do not pose a significant or substantial threat to the public or environment,” said Strathern. “Any future actions related to the crash site or remaining debris will be coordinated with the State’s Department of Land and Natural Resources.”