Donald MacPhearson is an internationally-recognized specialist in applied... 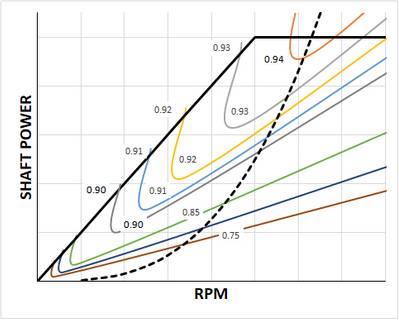 It is easy to appreciate why permanent magnet synchronous motors (PMSMs) are popular for use in underwater vehicles (UVs). They are compact and efficient with a high power density. More importantly, perhaps, they allow for effective operation across a broad RPM range which is beneficial for vehicles with multiple operating conditions. That said, we find vehicle product developers are often uncertain about a motor’s “efficiency”. This article offers a few comments from the perspective of a propeller designer, developing the components that puts the load on a UV’s motor.

We first must start with a description of the “system”, which is composed of the Vehicle (that establishes the thrust requirement), a Propulsor (typically an open or ducted propeller that creates the needed thrust), and the Drive (that prime mover whose only job is to spin the Propulsor at its necessary RPM). If we wrap the system into a conceptual unit, the system benefit is vehicle speed (or thrust, in the case of a towpull application) while the system cost is the “fuel consumption”. For systems driven by internal combustion engines, the cost is the consumption of fuel oil, say, in units of liters-per-hour. Engine manufacturers typically provide enough information about fuel consumption across the engine’s RPM and power range so that we can reliably predict fuel use for any application. A plot of this distribution is often called a “fuel map”, but let me have you think of it as an output-to-input energy “efficiency map”.

Unfortunately, we have a completely different circumstance when using PMSM drives. Confusion can arise because the generated benefit of the motor and the fuel used by the motor share the term “power” – one being the output mechanical shaft power (that drives the propulsor) and the other its input electrical power (a function of the voltage and current supplied by the controller). The ratio of the two is “motor efficiency”. Knowing the correct motor efficiency at all RPMs and loadings is critical to successful system design and analysis. While most developer testing records electrical power, we need to know shaft power for an understanding of the system’s overall performance.

While a manufacturer’s published motor curve indicates the limit of torque (and thus power) across the RPM range, they frequently only indicate the mechanical-to-electrical efficiency at a single design point or upon the torque limit. Unlike what is available from engine suppliers, we rarely have a full mechanical-to-electrical power “efficiency map” across the useful range of both RPM and shaft power loading for PMSMs. To obtain this data, some of our clients have their motors tested on small dynamometers to generate an efficiency map. However, this can be costly and time-consuming – and a potentially wasted exercise during early-stage design where there is a question if the motor will even be selected.
What are the sources of lost efficiency for PMSMs? The explanation is a complicated mix of terms like winding resistance, mechanical friction, even magnetic flux effects. So let’s simplify it a bit with some generalizations using broad terms of: mechanical load shaft power (PS), efficiency (EFF), RPM, and power losses (LOSS).

• To simplify things, we can say that losses are of two types: dependent on power loading or dependent on RPM.

• The losses (not the efficiency, but the losses) tend to be proportional a) to RPM and b) to the square of power.

A generic representative efficiency map is shown in the plots below for a “constant-torque, constant-power” PMSM. It is our practice to always convert a “torque-based” plot to one that is “power-based”, as we feel that power is a better way to communicate energy generation and transmission for vehicles and propulsors. The solid black line represents the motor’s limit curve, the dashed line is a generic propulsor demand curve, and the colored lines are sample efficiency map figures.

From this plot, we can see how operating at partial load influences motor efficiency. There is a broad range of RPM that maintains high efficiency, as nearly half of the upper range of RPM is within a couple percent of the motor’s maximum efficiency – so long as the motor is generating 80% or so of its rated power. In terms of vehicle operation, at top speed efficiency is maximum, pushing 95%. At 75% speed, power demand is 40%-45% and efficiency drops to 85%-90%. At 50% speed, little power is needed and motor efficiency can drop to less than 75%.

(Remember, these are generic figures used here to represent a concept. Actual efficiencies will vary from model to model.)
So, let me leave you with a few basic observations:

• The maximum potential efficiency of a PMSM varies with motor size – with larger power motors offering potential for higher efficiencies. For example, a 20 kW PMSM can have maximum motor efficiencies exceeding 95% at full load, where a motor less than 1 kW typically reaches only 90%.

• As noted above, while efficiency varies with RPM, there should be a fairly broad range of RPM that maintains high efficiency for most applications requiring full or nearly full load.

• Partial power loading is the big issue for most applications, as running a motor at low power can cause a significant drop in motor efficiency. For example, motor efficiency can drop to less than 70% for fractional shaft power.

Electric motors – particularly PMSMs – are an important focus of our development work for NavCad in 2020. We are working on simplifying the definition of these drives in NavCad with electrical power as the “fuel” and generic motor curve shapes (such as “constant-torque, constant-power”) for early-stage design. And, of course, we are deep into a prediction model for off-design partial load efficiency maps!

Read this story in the March 2020 edition of Marine Technology Reporter: https://magazines.marinelink.com/nwm/MarineTechnology/202003/#page/20

The move to autonomy on the world's waterways is undeniable, with the direction clear, the pace hazy. What is clear is the need for reliable…