Finland has more than a 100-year experience in underwater warfare, its threats and development of defense methods. The Forum Marinum Foundation has a vast collection of underwater warfare items dating back from the time before Finland’s independence all the way to the present day. This material has, until now, been stored in challenging conditions with a limited public access.

The cooperation between Forum Marinum, being also the host of the Finnish Navy Museum, and DA-Group enables to establish the exhibition based on the museum collection. The objective of the project is two-fold: to display this unique material and to preserve it in appropriate conditions.
Forum Marinum will manage and maintain the Underwater Warfare Exhibition. Guided tours of the Exhibition will be organized by Forum Marinum. Public open houses will also be offered. 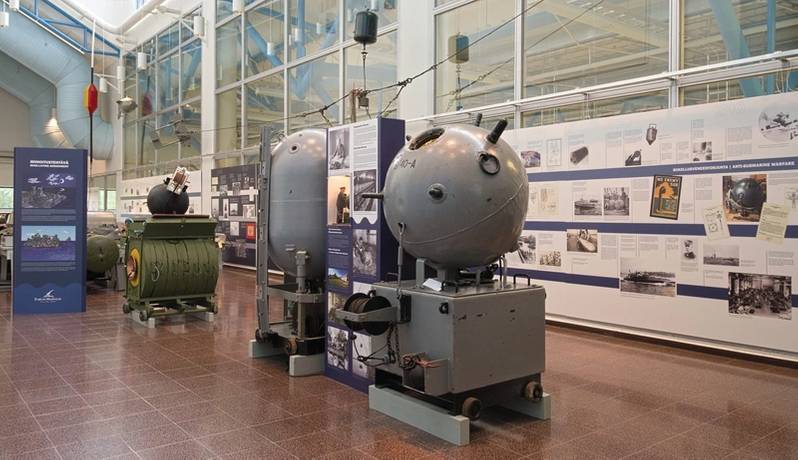 The comprehensive underwater warfare museum material being transferred to Forssa was previously housed in the Finnish Defence Forces’ underground storage facilities located in Pansio of the Turku area. The core element of the collection consists of over 80 naval mine items, originating in a collection of underwater warfare equipment put together by the Navy for training purposes since the 1920s. The Pansio naval mine collection was assembled in 1996 based on the initiative of Commander (ret.) Eero Auvinen as well as with the support of the Navy and individual sponsors.

The off-site exhibition in Pansio also consisted of previously preserved equipment, which was used in the Navy’s operations, such as mine detection and sweeping equipment, diver operations devices, various torpedoes as well as materials related to torpedo development and warfare.
Until 2019, the Finnish Defence Forces has carried the storage costs of the collection, and Forum Marinum has been responsible of its management with the mandate of the Military Museum of Finland. After the Finnish Defence Forces’ release of the underground storage facilities in Pansio, Forum Marinum has been seeking for the solution to preserve the special collection. DA-Group in Forssa became the collaborator.
Significant part of Finland’s naval defence history is now available to public