Fishermen Turn to Apps and AI to Tackle Climate Change 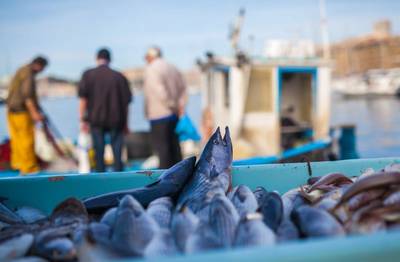 From weather predicting apps to using artificial intelligence to monitor the fish they catch, small-scale fishermen and coastal communities are increasingly turning to digital tools to help them be more sustainable and tackle climate change.

Overfishing and illegal fishing by commercial vessels inflict significant damage on fisheries and the environment, and take food and jobs from millions of people in coastal communities who rely on fishing, environmental groups say.

In addition, climate change affects on small-scale fishermen—who account for about 90% of the world’s capture fishermen and fish workers—include fish moving to new areas in search of cooler waters or if their habitat is destroyed, rising sea levels, and an increase in the number of storms.

Launched in January by nonprofit Environmental Defense Fund (EDF), the Small-Scale Fisheries Resource and Collaboration Hub (SSF Hub) is a multilingual website that aims to bring together fishermen, their communities and advocacy groups to connect, share ideas and find solutions to the problems they face.

The website has a resource library where fishermen can search for topics of interest, free online courses, a community forum, discussion groups, an events page and a blog section.

Although it requires a smart phone or computer and internet connection to access—which is often patchy in coastal areas—Rife said it had low data requirements and they are looking at ways to enable users to view its information offline.

The website’s resources can be easily shared via WhatsApp, Facebook or Twitter—platforms already widely used by many small-scale fishers to help get the best prices.

EDF also has a pilot project in Indonesia’s Lampung province on Sumatra island that uses an app to record and monitor catch in blue swimming crab fisheries to enable them to be more sustainable.

A separate pilot in Indonesia uses cameras with artificial intelligence (AI) and algorithms to monitor how many vessels are going out to sea and estimate their catch.

Find a balance
Since 2007, Taiwan has mandated that all small-scale fishermen use global positioning system (GPS) devices—that give a vessel’s location every three minutes—with the data collected and analyzed along with reports on fish catches, gear used, and auctions.

The system was also used in 2016 to estimate loss of earnings and allocate reparations to fishermen after an oil spill.

“This year, the device has been rather helpful in assessing fishery conditions and for offshore wind power farms—trying to find a balance between the environmental protection, fishing ground, and power industries,” said William Hsu, associate professor at the National Taiwan Ocean University, which helped with the project.

To alleviate privacy concerns, the government gave assurances that the data would be kept private unless ordered by a court and instigated fuel subsidies as an incentive for users.

Simon Funge-Smith, senior fishery officer at the United Nations’ Food and Agriculture Organization (FAO) in the Asia-Pacific, said while many technologies can be useful for advocacy groups, fishers’ groups and researchers, their benefits to small-scale fishers are limited.

Language, limited coverage of phone networks, and data requirements, can hold back many technologies, he said.

Apps that track locations and fish catches using less time-consuming and simple entries, or help users comply with rules and laws, are more likely to succeed in empowering small-scale fishermen, he said.

Mobile phones and online banking apps have “transformed” fishing and “lubricated the entire trading arrangement of what is a very perishable product”, Funge-Smith said.

The threat of data collected by digital tools being misused—like for taxation—is not huge, he said, adding that this would discourage its use or cause its misuse.

Ohi Masuda has been a geoduck and scallops fisherman for more than a decade near Baja California, Mexico, maintaining a family tradition that began when his ancestors came to Mexico from Japan in the 1950s.

Masuda has to cope with rising sea temperatures impacting the types of fish he can catch, and the need of cool water for the processing of fish before being shipped to Asia.

“It could help us to innovate,” he said about the SSF Hub, while conceding that limited internet connection could hinder access for some fishermen.

"In Mexico, we often believe that we need to concentrate our efforts only on catching enough fish to sustain a fishery without investing in post-harvest processes, transportation, added value, management, or distribution."