After four years spent developing a hybrid AUV/ROV (HAUV) based on a modified Saab Sabertooth AUV system, Modus Seabed Intervention has now bought its second, deep water rated Sabertooth, which will be delivered this summer.

The acquisition of its latest 3,000m-rated Sabertooth, will enable the company to continue to build on its track record and to offer vehicles with enhanced artificial intelligence and autonomy capabilities.

The company’s vision is for its HAUVs to operate infield at offshore oil and gas and renewables sites, including wind farms, independent of service vessels. This could be via a surface deployment system or via a subsea garage/docking station, which the vehicle can ‘fly’ in and out of. From the docking facilities, the vehicle can operate as an AUV (without a tether), using onboard batteries, or, where direct control is required, it can operate like an ROV either via a fiber optic tether (which enables very long excursions), or by means of a full power and control umbilical.

Instead of being deployed from a dedicated support vessel, the docking station is designed to be deployed to the seabed from a vessel crane. The aim is to use a vessel already engaged at a specific location, such as a supply vessel, DSV or offshore renewables service vessel.  The HAUV can then perform inspection and/or survey independently, in synergy with the vessel’s primary activity, reducing costs. The HAUV will return to its dock on completion of the work scope and will wait to be recovered at a convenient time. “For example, if you have engaged a vessel to perform a platform supply run, you can drop off the HAUV on the way out and then pick it up on the way back after it has completed its predetermined task,” says Nigel Ward, Modus’ chief commercial officer. Based on the battery capacity of Modus’ current HAUV, surveys covering about 60km can be run on a single autonomous charge, with survey time depending on speed and payload.

Modus’ background is in subsea trenching services. When the company was looking to invest in new technology, it felt that the ROV market was mature, if not saturated, so Modus looked to diversify and acquired a Remus AUV with a view to providing lower cost survey and inspection services from vessels which were already out working. The intention was to piggy back off vessels and let the Remus go off and do its work while the vessel continued with its primary task (instead of an ROV being used, tying up an ROV support vessel The benefits were seen to be a reducing human error  making offshore projects easier, keeping skilled staff onshore and reducing costs and increasing safety.

The Remus was not quite the right vehicle for the activities Modus were involved with. It came with a side scan sonar, but customers wanted bathymetry and, like many AUV systems, it was difficult to upgrade the vehicle or change out sensors for different applications,” says Ward.  “In any event, the existing AUVs in the market are not actually that autonomous, often the vessel needs to track the vehicle during a scope, which, in our eyes, defeated the object of the autonomous feature.” 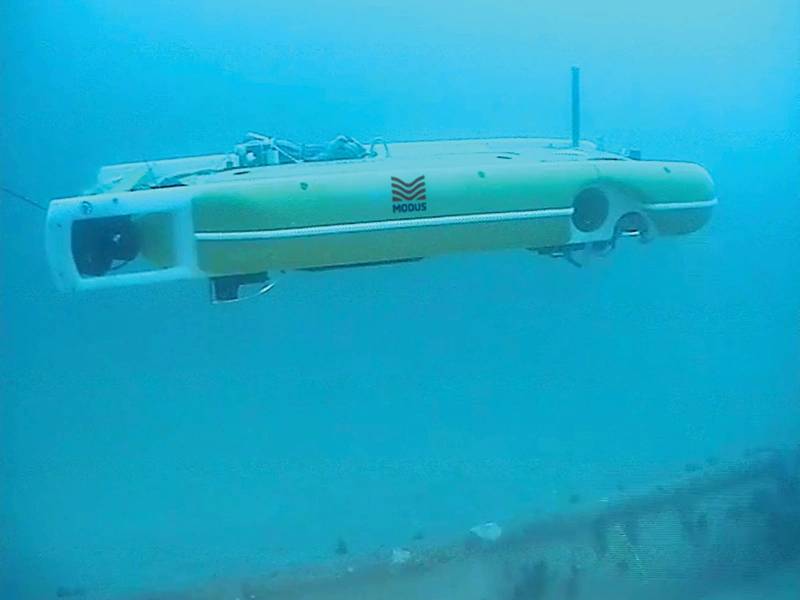 So, Modus looked at Saab Seaeye’s Sabertooth. “It’s a cross between an ROV and an AUV. We wanted the benefits of both. The ability to mount a flexible survey sensor payload quickly and easily is critical to meet customer requirements. We can hire a sensor, integrate it and away you go.

There’s so much new survey technology being developed at the moment, so we wanted to make sure we could use it so as to future proof the vehicle.

“We also wanted to be able to hover like an ROV, have the speed of an AUV and be able to perform truly autonomous operations, so you don’t have to dedicate a vessel to chase the HAUV with an ultra-short baseline positioning system. We felt that the Saab Sabertooth meets this criteria.

“The vehicle relies, in its base package, on its IXBlue Phins3 INS, and RDI workhorse DVL, with data acquisition, navigation and processing of sensor data managed by QINsy, which also takes in Novatel DGPS data. However, the payload is flexible and it could also work within long baseline (LBL) arrays or with a USBL system where required, with a Sonardyne AvTrak 6, providing a transducer, transceiver and telemetry link in one”, says Ward.

In 2017, the company performed demonstrations and trials and the HAUV was ready for commercial operations in 2018.  In one of the trial projects in 2017, the HAUV was launched from a quayside at a lake close to Saab’s Facility in Sweden to perform a “mow the lawn” style pre-programmed survey collecting MBES, SSS and SBP data over about a 15km route, with no external aiding from a support vessel (just the vehicle’s DGPS, INS and DVL). “Having gone out and repeated the survey, it saw very little drift,” says Ward. The vehicle was also successfully trialed multiple times, autonomously docking into its subsea garage. In early 2018, this function was further developed, as part of an Innovate UK funded project for wind farm resident inspection performed. This trial was run at the ORE Catapult facility in Blyth and also involved indirect power coupling and data transfer using a Blue Logic inductive connector.

In the final phase of this funded demonstrator project, later this year, in between its commercial commitments, the company will trial a resident hybrid AUV concept at an offshore wind farm in the UK. The HAUV and its docking station will be dropped off for a mission, similar to a demonstration at the ORE facility in Blyth. On this occasion, it will not interface with any of the wind farm infrastructure. “However, to plug the docking station into a wind farm, to access power and communications would be relatively straightforward”, says Ward, “as there’s already available power and data infrastructure used for work on the turbines that we can tap into.” 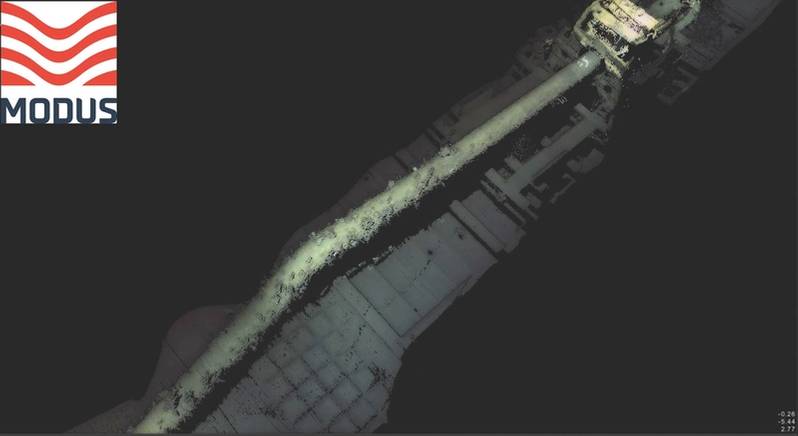 Last year, Modus deployed a HAUV offshore NW Australia to perform circa 240km of pipeline integrity survey, producing stunning images, as well as point cloud data, of both the pipeline and passing marine life (see inset with detail of the shark’s teeth, taken at 2knts) using a Cathx Scout laser profiling and HD imaging spread alongside a multibeam echosounder (MBES).

The survey time was half of what it would have taken using a traditional ROV to perform the survey and it could have been faster,” says Ward. “Such a survey is possible without a tether, but it was performed with a tether on this occasion so that real time data could be collected.”

For navigation, the vehicle used USBL aiding to follow a route position list from as-built charts of the pipeline.  This can be combined with the autonomous pipe tracking algorithm which uses pipe profile data collected for the MBES to follow the pipe route.  This is particularly helpful if the as-built position is not accurate which may be caused by inaccuracy caused by positioning tolerances. “Because of these systems the AUV can, in effect, see the pipeline, it means that USBL aiding isn’t always required to perform a pipeline inspection, enabling autonomous operations away from support vessels,” says Ward. “The CathX Laser system provides a very high-resolution point cloud of the pipeline and adjacent seabed. The Laser and MBES point clouds were combined in post processing and used to assess position and possible freespans. The very high resolution obtained from the laser system makes it suitable for spool deflection and other photogrammetry-based metrology surveys.”

Because the vehicle is stable, quiet and can fly at a constant height above the pipeline, imagery and measurements produced from laser-based point clouds, stitched together with the HD camera imagery, is highly accurate and easy to process.

One of the markets Modus is targeting is offshore wind. Turbine array fields are often in high current areas, so in 2017 the company put its HAUV to the test at a hydroelectric plant in Sweden, where the 4.5kt speed capable vehicle demonstrated its ability to maintain position and maneuver successfully in 3kts of current. At offshore wind sites, often there are walk-to-work service vessels deployed in field for maintenance activities, these are effectively hotel boats with a lot of redundant time.  We have developed HAUV to be able to be deployed and recovered from these vessels essentially replacing the need to mobilize an ROV vessel to perform inspection activities. It makes the service vessel more valuable.

For Modus, it is not just about visual inspection. The company has also been trialing Force Technology’s FIGs system, which can do non-contact cathodic protection surveys at 4knts, alongside while doing GVI survey.

“Saab have designed a robust subsea vehicle and we have developed it further so that it can be operated as a class leading survey and inspection vehicle,” says Ward. “We have focused on how the sensors are integrated, how they talk to each other, mission software and we are now moving into artificial intelligence and machine learning capabilities. We can already say ‘go here, if you see a pipeline, follow it, or if you see a monopile, perform an inspection around its circumference’. This has all been demonstrated in trials.  The next set of autonomous developments will be very exciting. In the near term we want to develop the HAUV track and survey buried cables autonomously. Various pipe tracking technologies are currently being trialed.  This is expected to be a quick development as we can use similar algorithms to those used to track visible pipelines.”
It’s not been an easy journey, but Ward sees that some are seeing the potential. “There is no doubt we have faced challenges in bringing this technology to market,” he says. “Primarily, many companies want to carry on doing operations the way they always have, for example some operators still specify ROV and boom cameras for pipeline inspection.  But those customers who have embraced this HAUV, that require a slightly different approach to tackling GVI, have reaped the benefits in cost savings and improved data quality.

“HAUV has been fully commercially operational for nearly a year now, it has a growing track record and we are very excited about the further optimizations and features that we plan to commission over the coming months, in addition to welcoming our second HAUV to the fleet in a few months’ time."