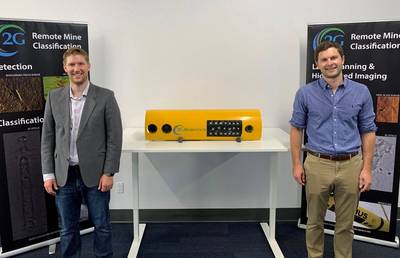 Jason Gillham (left) and Chris Gilson with one of 2G Robotic’s latest RECON line of payloads for light, modular AUVs.

Jason Gillham, founding Chief Executive Officer of underwater laser scanner and imaging systems specialist, 2G Robotics, is stepping down from his role at the company in August 2020.

Gillham will remain available to the board of directors and to parent company Sonardyne Group during the leadership transition period. Chris Gilson, 2G Robotics’ Product Development Manager, will take over as Acting General Manager.

Founded in 2007 and headquartered in Ontario, Canada, 2G Robotics is a leader in mobile scanning and imaging technologies that improve the speed and accuracy of subsea inspection using remotely operated vehicles (ROVs), autonomous underwater vehicles (AUVs) and manned-submersibles.

Under Gillham’s leadership, the company pioneered the use of lasers to generate high-density point clouds that help identify small features, defects and collect precision measurements for a variety of survey tasks. 2G Robotics was acquired by Sonardyne Group in early 2020.

“Jason has put 2G Robotics on a great course for the future and he leaves behind a strong and empowered management team," said Stephen Fasham, 2G Robotics’ chairman and Sonardyne Group’s Chief Operating Officer.