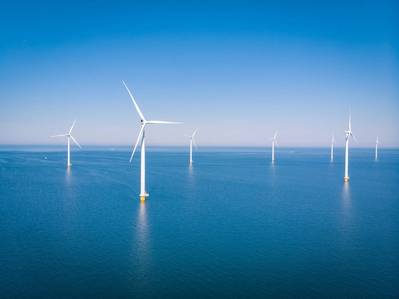 France wants to construct a wind farm off the coast of Normandy as the nuclear-dependent nation moves to expand power generation from renewable sources, the energy ministry said on Monday.

The planned 1-gigawatt (GW) wind farm could have up to 80 wind turbines of around 12 megawatts each, in an area where wind conditions and the seabed are very favorable for offshore wind power at a competitive price, the ministry said in statement.

France is racing to boost the share of renewable generation capacity in its energy mix and reduce its dependence on nuclear energy. It plans to shut down old nuclear plants and will phase out coal-fired generation to curb greenhouse gas emissions.

"The development of renewable energies, especially at sea, is a major component of the diversification of our electricity mix," Ecology Minister Elisabeth Borne, who is also in charge of the energy portfolio, said in the statement.

The ministry said it plans to boost the share of renewables in the French energy mix to around 40% by 2030. Nuclear power from its 58 reactors currently covers around 75% of French electricity needs.

Although France has one of Europe's biggest coastlines with good wind speeds for viable wind farm projects, it is lagging its European peers in developing offshore wind projects.

The government announced in June that it will double its target for developing offshore wind projects to 1 GW per year from 500 MW. It currently has no offshore wind farm in operation.

The Normandy offshore project is likely to attract bids from major energy companies such as state-controlled utility EDF , energy major Total and Engie as the firms vie to expand the footprint in the renewables sector.

EDF edged out rivals Total and Engie for a contract to build a 600-megawatt (MW) offshore wind project near Dunkirk in western France in June.