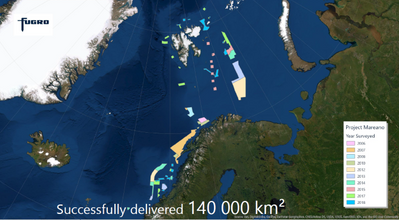 The Norwegian Hydrographic Service has awarded Fugro another hydrographic survey contract as part of the MAREANO seabed mapping program, financed by Norway’s Ministry of Trade, Industry and Fisheries, and the Ministry of Environment.

Fugro said it has already completed 10 surveys for the program since 2006 and acquired over 140,000 km2 of data. This latest survey will collect high-resolution, high-density multibeam echosounder and sub-bottom data to produce seamless datasets for the Norwegian mapping program. The fieldwork will run from June to late October this year.

The survey area covers approximately 2,700 km2 over Spitsbergenbanken, a large bank in the Barents Sea, in water depths ranging from 30 m to 500 m. Fugro said it will use state-of-the-art-sensors, advanced calibration techniques and oceanographic measurement workflows designed for acquiring vital Geo-data in this challenging environment.

During the survey campaign, Fugro will continue its ongoing contributions to crowd sourcing initiatives such as The Nippon Foundation-GEBCO Seabed 2030 project, the global initiative to produce a high-resolution map of the world’s ocean floor by the year 2030. To date, Fugro has donated 622,000 km2 of bathymetric data to Seabed 2030, collected during transits to and from global survey areas, and aims to boost this contribution with transit data from the MAREANO program.