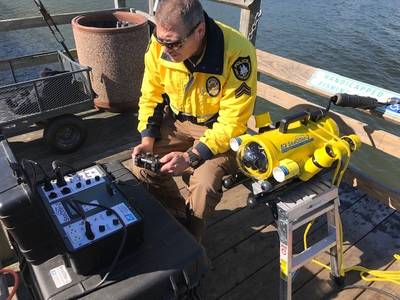 After over 50 years in business, the JW Fishers team has heard just about every story possible concerning sunken ships, hidden treasures, scientific experiments, unexploded ordinance, location of drowning victims, and missing evidence recovery. The tools we provide to the operators undertaking these tasks vary from metal detectors and sonar systems to Remote Operated Vehicles (ROVs).

According to The Remotely Operated Vehicle Committee of the Marine Technology Society, “exactly who to credit with developing the first ROV will probably remain clouded, however, there are two who deserve credit. The PUV (Programmed Underwater Vehicle) was a torpedo developed by Luppis-Whitehead Automobile in Austria in 1864, however, the first tethered ROV, named POODLE, was developed by Dimitri Rebikoff in 1953.” In late 1960’s, the US Navy began developing robots to help locate and recover underwater ordinance. By the 1980’s, commercial companies began utilizing the technology to aid in the oil and gas industry. Now, ROVs are used in all manner of exploration and commercial applications from dam and water tank inspections, evidence recovery, pipeline maintenance, aquaculture, and drowning victim recovery.

James City County, located in the Commonwealth of Virginia, has an estimated population of 67,000 citizens. The county has a Marine Patrol and Underwater Search and Recovery Team that employs their JW Fishers’ SeaOtter-2 ROV whenever mission accomplishment is of the utmost importance. Many of the local waterways are low visibility and the need to use an ROV is minimal. There are, however, several areas in which an ROV is absolutely the right tool for the job. Local retention ponds, a county reservoir, the Chesapeake Bay, and a very brackish river are all waterways that the team are able to operate the ROV in without hesitation. Lt. William T. McMichael recently shared one experience that highlighted the versatility of JW Fisher’s ROVs. “One operation we were called to was a submersed vehicle in a retention pond behind a hospital. A grounds employee observed the top of a vehicle as he glanced out over the pond. We arrived on scene and sent in the SeaOtter-2 ROV. We were able to circle most of the vehicle with great visibility and obtain the vehicle tag. We were able to discover that the vehicle had been stolen two years earlier. It was unknown how long it had been in the pond. We were also able to send the Sea Otter-2 inside the vehicle as the window was down.

We could see in the front seat and the back seat to see that no bodies were inside. This helped our divers see the make and model of the vehicle and the condition of most of the vehicle prior to getting in the water.” Lt. McMichael went on to say “we also utilized the SeaOtter-2 in a regional public safety dive training event assisting with surveying in an archeological dive for the ships scuttled by General Cornwallis along the York River in Yorktown, VA. The ROV was used to identify any visible ship remains from the Revolutionary War. We absolutely love the Sea Otter ROV. Given the right conditions and clarity, the ROV gives us a tool to send in and scout the underwater environment prior to sending in any public safety divers.”