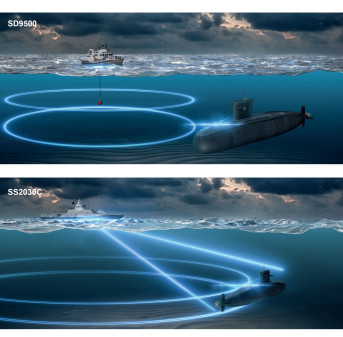 Kongsberg Maritime AS, Sensor & Robotics has signed a contract with Saab that will see Kongserg delivering its Anti-Submarine Warfare (ASW) and diver detection sonars for the Pohjanmaa-class corvettes currently being developed by the Finnish Navy under its Squadron 2020 project.

Under the terms of the contract, which equates to approximately NOK 100 million, Kongsberg will equip the vessels with its SS2030 and SD9500 sonars, both of which boast acoustic properties which make them ideally suited for deployment in shallow-water environments.

The SS2030, principally devised for ASW operations and capable of detecting torpedoes or other small objects in the water column, is an active hull-mounted sonar which utilizes sophisticated tracking algorithms. Its electronically-stabilized transmitting and receiving beams can be tilted to adjust to challenging sound speed profiles, with its integrated Sound Propagation Model determining the optimal tilt settings and enhancing the Probability of Detection (PoD) ratio. The SS2030 sonars will be delivered to the Finnish Navy complete with hoistable hull units and ice protection to ensure safe and efficient operation in the often harsh conditions of the Baltic Sea.

The SD9500, meanwhile, is a light and compact over-the-side dipping sonar with  horizontal and vertical positioning capabilities for diver detection, ASW duties and volumetric survey assignments in shallow, reverberation-limited waters.