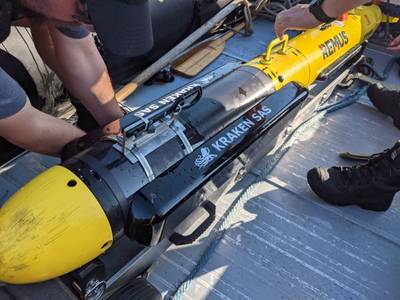 Canadian marine technology company Kraken Robotics Inc. on Wednesday announced it has been awarded a prime contract with the Government of Canada to provide Remote Minehunting and Disposal Systems (RMDS) for the Department of National Defense (DND). The contract consists of an estimated 24-month acquisition program followed by an initial five-year Integrated Logistics Support (ILS) program, which includes options for additional equipment, spare parts, training, and technical support.

Under the program, Kraken will deliver remote minehunting and disposal systems to His Majesty’s Royal Canadian Navy on the East Coast (located in Halifax, Nova Scotia) and the West Coast (located in Esquimalt, British Columbia). The RMDS consists of two classes of Autonomous Underwater Vehicles (AUVs): Light Weight AUVs and Operator Portable AUVs, all of which will be equipped with Kraken’s AquaPix synthetic aperture sonar. The RMDS also includes a number of Combat-variant and Training-variant mine disposal systems (MDS), transportable command center (TCC) and Computer-Based Trainer (CBT).

Formal contract signature and kickoff of the Acquisition program will occur in January 2023. If all options in the Acquisition and ILS programs are selected, the total value will exceed $50 million, consisting of approximately $40 million for Acquisition and $10 million for ILS. Kraken expects margins on this program to be in line with our historical corporate averages. Progress payments will be made over the 24-month term of the acquisition contract.

Karl Kenny, President and CEO of Kraken, said, “This represents a huge win not only for the Kraken team as innovators of world-leading minehunting solutions, but also an immensely proud moment for our Canadian personnel. Delivery of Kraken’s RMDS solution will provide Canada with a world-class mine-hunting and mine disposal capability, and enable further collaboration with our NATO allies, leveraging common technology platforms across our allied fleets. For Kraken, this program is building upon the success we have had supplying underwater sensors, platforms, and services to a number of NATO navies including the US, UK, Australia, Denmark, Poland, and others. Kraken has deployed our SAS solutions on the family of HII AUVs across several countries, so we are looking forward to bringing that field-proven capability to the Royal Canadian Navy.”

Nick Burchill, VP Sales, Kongsberg Maritime Canada Ltd, said, “This world class system will enable the Canadian Armed Forces to safely detect and, if necessary, neutralize underwater threats without the need to enter a suspected minefield.  Being able to declare sea lines of communication as “safe”, in times of crisis, is critical to the Global Economy.”

Duane Fotheringham, President of the Unmanned Systems business group at HII’s Mission Technologies division, said, “We’re proud to be part of the Kraken team bringing this world class mine hunting capability to the Royal Canadian Navy.  Our newest REMUS 300s represents the most advanced man-portable AUVs on the market today.”

Rick Gerbricht, President & CEO of tkMS Canada, said, “We are pleased to be working with Kraken to deliver to the RCN our combat proven SEAFOX Mine Disposal Vehicle, which is in active service with 12 navies on over 70 different platforms.  As part of the RMDS solution space, SEAFOX is easy to handle, requires little preparation time and operates with a high degree of safety and efficiency, serving as a distinct force multiplier in theatre of mine warfare.”

René Bertelsen, CEO of SH Defence, said, “We are proud to have our containerized multi mission module system “The Cube” selected by Kraken as the new transportable command center and handling system for the Remote Minehunting and Disposal System (RMDS). With this choice of modular system, the Royal Canadian Navy will not only be able achieve interchangeability between RCN platforms but also with allied nations. “The Cube” also supports the RCN’s mission requirements for future containerized maritime operations and warfare capabilities by providing the ability to adapt new emerging technologies in a safe, easy, and cost-efficient way.”

The Minister of National Defence has a mandate to ensure that the Canadian Armed Forces (CAF) are equipped and prepared, if called upon, to protect Canadian sovereignty, defend North America, provide disaster relief, conduct search and rescue, support United Nations peace operations, and contribute to the security of our allies with their operation and coalition operations abroad. Anti-mine warfare is a critical mission for the Royal Canadian Navy (RCN), as unfriendly nations can easily disrupt the global economy by threatening to plant naval mines in crucial commercial waterways.

The RCN have a need to transform the way it conducts Naval Mine Countermeasures (NMCM) and seabed mapping from a post-cold war that focuses in pre- and post-operations mine clearance using surface ships, to a quickly deployable, autonomous systems that are accurate, flexible, replaceable, cost effective, and minimizes risk to personnel. Various allies’ research centers and navies employment of these systems has demonstrated they are effective in live NMCM operations.

The RCN’s Force Development ambitions for NMCM is to evolve present capabilities to include acquisition of accurate, modularized, portable and deployable systems that minimize ship’s staff exposure to potentially explosive ordnance and are operable from any platform including from ashore. The RMDS capability is required to ensure safety for RCN warships and commercial ship navigating in critical maritime waterways worldwide. Accordingly, the capability must be modular, portable, and operable from various platforms or from shore locations.