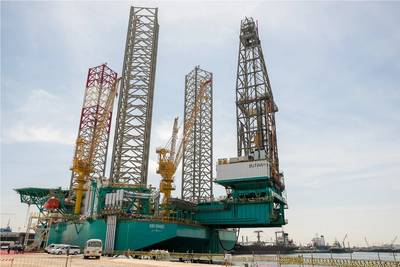 Lamprell announced the construction of the jackup drilling rig, the “Butinah”, and delivery to Abu Dhabi’s National Drilling Company (NDC) safely and within budget.

This comes following an announcement last week where NDC exercised one of its existing options and awarded a further contract to Lamprell to build a ninth rig in the series. The “Butinah” rig, which achieved an exceptional safety record, departed Lamprell’s Hamriyah facility on 1 May, and is sailing to its drilling location in the Zakum Field off Abu Dhabi.

The contract for the NDC “Butinah” rig was signed in April 2012 and this is the sixth in a series of nine rigs being built and delivered by Lamprell to NDC.  All nine rigs have been or will be designed according to the Cameron LeTourneau Super 116E (Enhanced) Class design.  The “Butinah” rig now joins its sister rigs, the “Makasib” the “Muhaiyimat”, the “Qarnin”, the “Marawwah” and most recently the “Shuwehat” which was delivered in December 2014. All of the rigs are on charter to the ADNOC group of companies.

With the delivery of the “Butinah”, Lamprell has now delivered a total of 27 new build jackup units, and its fourteenth Super 116E jackup drilling unit, to various clients during the last nine years.

NDC also has further options for Lamprell to build up to an additional two jackup rigs, which have been extended to 3Q 2015.

NDC Chief Executive Officer Abdalla Saeed Al Suwaidi commented, “NDC has launched this strategic Offshore Rigs Acquisition Project to maintain the highest levels of reliability and availability in order to meet clients’ present and future requirements.  Our partnership with Lamprell to build offshore jackup rigs in the UAE has made us the first and only Middle Eastern country capable of building such critical engineering, high-tech oil and gas rigs.  I would like to extend my sincere appreciation to ADNOC higher management and the NDC Board of Directors for their guidance and continuous support. I would also like to thank ADMA-OPCO for their cooperation and trust, and Lamprell for their distinguished efforts.”

Commenting on the delivery, Jim Moffat, Chief Executive Officer, Lamprell, said, “I am pleased to announce the completion and delivery of this sixth jack-up rig to NDC, to industry leading standards of safety and quality, with over four million manhours worked without a day away from work case. This is the third major delivery of its kind for Lamprell in 2015 and is testament to our excellent capabilities in project execution for major projects, confirming our key role in the global energy industry.

"This successful project delivery would not have taken place without close teamwork and the strong relationship between the Lamprell and NDC project and management teams. We look forward to working with NDC on the ongoing projects which are proceeding as planned.”