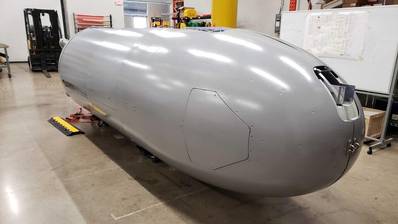 These vessels, along with Leidos-developed unmanned surface vessels (USVs) Seahawk and Sea Hunter, can perform a growing number of jobs without hazarding human divers. They will feature technology to support military and commercial activities alike.

“We’re in the middle of a momentous change in warfare,” said Leidos executive and retired Rear Admiral Nevin Carr. “The shift toward autonomy, especially naval AI, is potentially as impactful to the future of warfare as the advent of aviation 100 years ago.”

Leidos is currently developing Viperfish, which will be  one of the most densely packed and technologically advanced underwater vehicles ever built, said Leidos Maritime CTO and retired Navy officer Chuck Fralick. Viperfish, based on the L3Harris Iver4 900 UUV, will support the U.S. Navy through oceanographic sensing, data collection, mine countermeasures and more.

“Over the last few years, we’ve reached a place where we can realize the promise of UUVs by integrating reliable AI, powerful lithium batteries, synthetic aperture sonar sensors (SAS) and greater onboard processing power,” Fralick said. “We believe Viperfish will be an elegant confluence of all of those pieces at just the right time for the U.S. Navy.”

Along with Nauticus Robotics, Leidos is also developing a larger UUV for undersea exploration jobs that can be dangerous or impossible for human divers, including mapping the ocean floor, studying sea life and monitoring water pollution.

“Both vessels are significant projects for Leidos, which is one of the leaders in autonomous oceangoing systems,” Carr said.

Looking ahead, Carr and Fralick believe that over time, UUVs will be capable of completing longer and more challenging missions, adapting fluidly to changing parameters and mitigating subsystem failures.