Ikka Fjord in SW Greenland is the only known place in the World where the rare carbonate mineral ‘Ikaite’ (named after the fjord) is found in the form or large column structures, as opposed to its usual small crystal form. Over the past 25 years there has been an intensive scientific effort to try and understand why the mineral forms here and in such dramatic form. 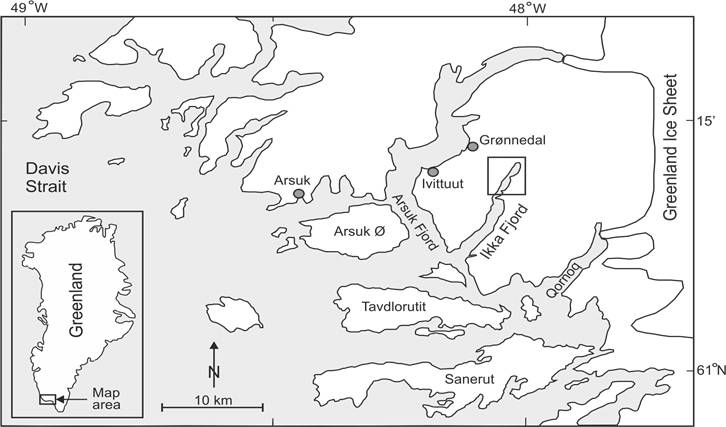 Ikaite is found in areas outside of the Fjord, generally in sediments where an identified calcite inhibitor exists facilitating the formation of Ikaite meaning its presence can be explained. Without an inhibitor common calcite, not ikaite would otherwise form.

In recent years ikaite has been found forming in Arctic and Antarctic sea ice. This is an especially interesting development as there are no known calcite inhibitors in open marine settings where sea ice can form, suggesting that there are other methods of Ikaite formation. If we can understand the key factors for ikaite precipitation, using Ikka Fjord and its columns structures as a case-study, then maybe ikaite formation could be industrialized and used for the removal of carbon from the atmosphere and sequestration in ikaite in seawater? Microbial activity within the columns is currently the primary investigation target to see if enzymes they produce catalyse ikaite precipitation. Image courtesy NorbitThe results revealed the extents of the deposits, but with low accuracy, making these maps inadequate as aids to the research efforts. What was required was a high resolution multibeam survey of Ikka Fjord to provide usable bathymetric maps.

The NORBIT iWBMSh was identified as the ideal tool for the task, being both highly compact, as well as a highly specified, turn-key ultra-high resolution multibeam survey system. 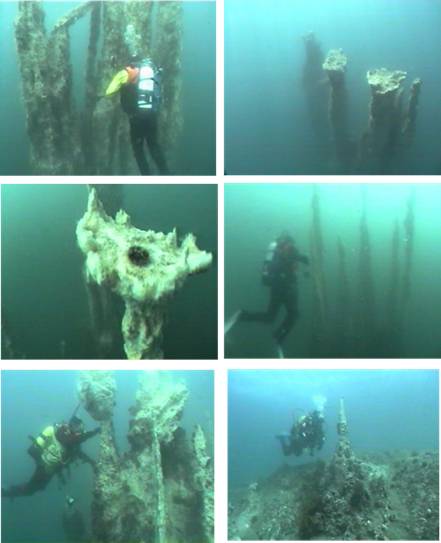 Image courtesy NorbitThe iWBMSh system shipped to the University of Iceland for the project comprised: the sonar head with integrated INS; a small top-side interface box; two GNSS antennae and cables; all of which were contained in a medium sized, roll-along Peli Case. In addition to a NORBIT Travel Mount and NORBIT SVP probe packaged separately.

The multibeam equipment was flown as checked luggage with the scientific team from Reykjavik, Iceland to Narsarsuaq airport, S, Greenland. On arrival the team and luggage were conveyed to ‘Siku’, a Targa 25.1 boat, rented for the transfer to Ikka Fjord as well as the multibeam survey platform. 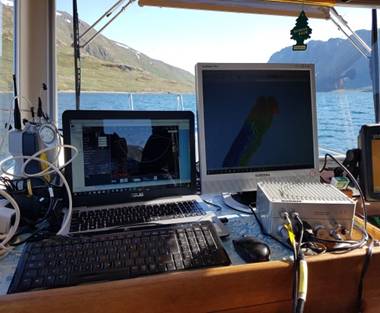 Image courtesy NorbitThe iWBMSh was mobilized onto the Targa 25.1 alongside the Royal Danish Navies bases jetty at Grønnedal. The iWBMSh head and GNSS antennae were pole-mounted just aft of the wheel-house saddle clamped over the gunwales and secured to the railings. The NORBIT SIU, acquisition computer and helmsman monitor were set up on the chart table to the left of the cox’s station in the wheel-house and the whole system was powered off domestic sockets by the boats own inverter supply.

The survey of Ikka Fjord was conducted between the 20th and 21st June 2019, with the first day spent partly on training and familiarizng the cox with the survey requirements and reconnaissance to identify navigation hazards in the fjord caused by the columns and rock skerries as well as some acquisition. The second day was spent entirely on acquisition followed by demobilization of the spread from ‘Siku’.

The system was set to acquire a 150° wide swath (comfortably within the instruments 5°-210° angular swath angles range limits) of high-resolution data with the acquisition ‘depth’ gates set to 2-40m water depth. In this mode the system typically achieved raw swath-widths (ignoring the very outer beams) of +/-20-30m in shallow water (8-10m) and +/-40-50m in deeper water (15-20m). 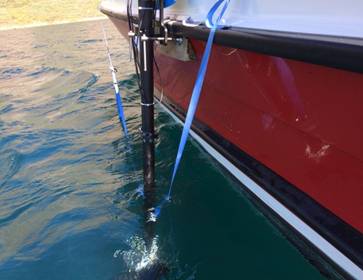 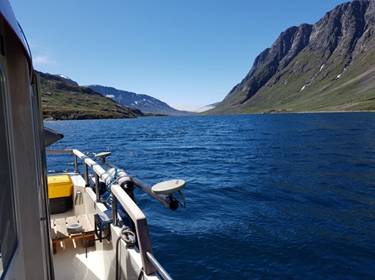 Where full swath coverage was possible, ping density was typically 16x16 pings (256 soundings) per m2 along and across track at the nadir reducing to 4x4 pings (16 soundings) per m2 at the edges of the usable swath. The following examples shows a section of cleaned soundings from the inner fjord ‘column garden’ displayed as a point cloud: 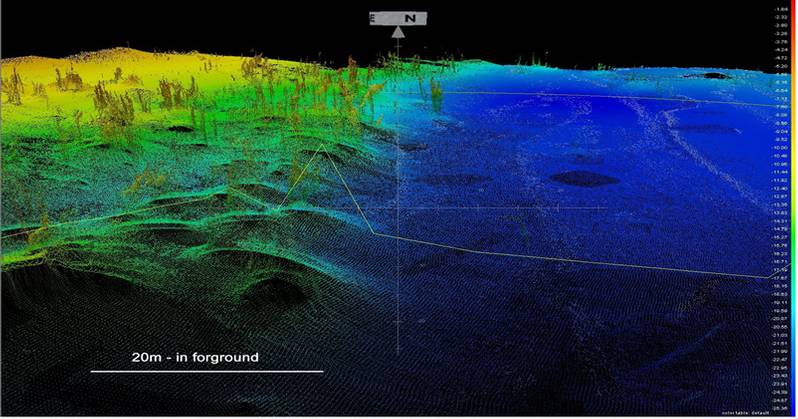 The data acquired over the two days of survey were processed using Teledyne PDS software and exported at 0.2m - 1.0m grids for mapping and presentation purposes.

A plot of the whole survey data set gridded at 1.0m of the gridded data is shown right.

Bathymeetric Contours are plotted against an aerial photograph orthomosaic constructed from drone imagery and a MBES derived 0.5m bathymetric DTM colour depth scale to the right of map image. Bathymetric contours were derived from a 0.5m DTM of Ikka Fjord. Note: depths are not yet hydrographically audited and should not be used for navigation.

3D representations of the 1.0m gridded data set of the inner fjord ‘Ikka Column Garden’ area and the same inset with drone-acquired point cloud data of the flanks of the fjord are shown below.

The data acquired in the summer were good enough for immediate use in the field and helped guide a team of divers from the Royal Danish Navy to specific sites for sampling. Since the survey the data acquired have undergone a basic level of processing to produce the displayed results. However, further processing is in progress including improving the positional accuracy with the application of Applanix POSPac PP-RTX corrections.

Further surveys are planned over the coming years to monitor the deposits in the locality motivated by the fact that recent changes to currents around Southern Greenland, attributed to global warming, are bringing warmer water in to the fjord. As ikaite formation is temperature sensitive the changes in water temperature poses a threat to the future health, condition and long-term stability of this spectacular, but now vulnerable location, that itself may hold the key to a powerful tool in the fight against global warming!

There have been a large number of publications produced by the ‘Ikka Project’, as we refer to ourselves, over the years. The most significant, recent references that would direct those interested in other articles would be:

Acknowledgements:
Mapping the Ikaite columns of the Ikka Fjord, SW Greenland
We would like to acknowledge and thank the Bolin Centre for Climate Research in Sweden, ‘Aase og Jørgen Munters Fond’ and ‘Aage V. Jensens Fond’ in Denmark, Eggertsjóður and the University of Iceland’s Research Fund for their financial support to the Ikka project in 2019. Furthermore, we would like to thank the Joint Arctic Command for their excellent logistical and diving support as well as Blue Ice Explorer of Narsarsuaq in Greenland who have supplied the boats and skilled coxes required to access and work in Ikka Fjord. Finally, we would like to thanks NORBIT and Teledyne Technologies for their interest in our project and the support provided to facilitate the invaluable MBES survey described here.