Marine scientists on Schmidt Ocean Institute's research vessel Falkor completed a 12-day expedition off the coast of Southern California to survey the biodiversity of deep sea areas rich in minerals that are of interest to deep sea mining developers around the world.

The expedition, which covered 5,310 sq. mi., explored nine deep sea sites, including the offshore site where possibly hundreds of thousands of barrels of toxic waste from the production of the insecticide DDT were dumped from 1947 to 1982.

With an underwater robot, the team of scientists from UC San Diego’s Scripps Institution of Oceanography and the United States Geological Survey collected sediment and biological samples around six barrels to understand potential ecological effects of the dump site and to determine the levels of DDT present in the ecosystem after more than 50 years. The site had been surveyed previously by scientists from UC Santa Barbara
and Scripps on previous expeditions.

The goal of the Schmidt Ocean Institute expedition was to establish mineral and biological baselines in the area known as the southern California Borderland, which has the potential for deep sea mining. The area contains rare earth marine minerals such as ferromanganese and phosphorite that are used in the manufacture of electronics, electric car batteries, solar panels, and other green technologies.
.
Scientists collected more than 300 samples of seafloor rocks, sediment, seawater, and  marine invertebrates to better understand the ecology, mineral and microbial makeup of the relatively unexplored deep-sea system. In collecting samples, researchers also hope to evaluate the therapeutic or drug discovery potential of deep-sea microbes found in mineral-rich areas. 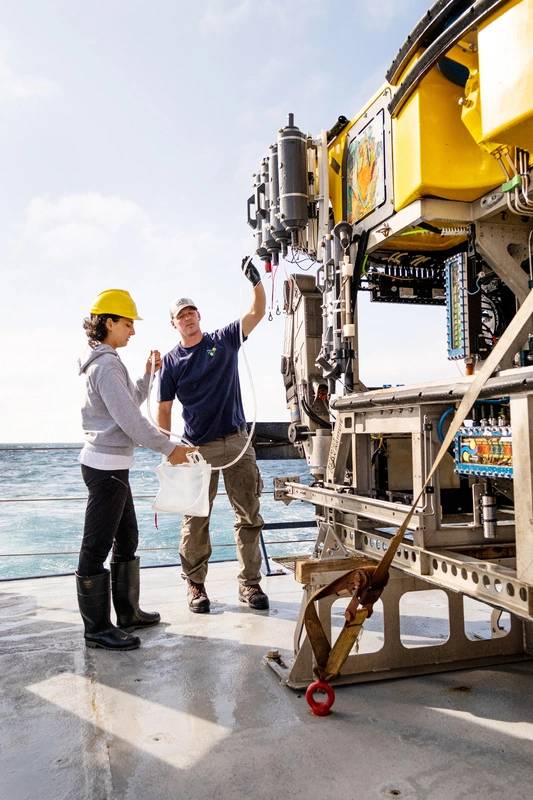 “We are just beginning to understand the valuable resources of our ocean ecosystem,” said Wendy Schmidt, co-founder of Schmidt Ocean Institute. “We can’t protect what we don’t know and understand, and the human impact on our ocean over the past 75 years has had a detrimental effect on its health and on the many ocean systems that support life on land. We expect the knowledge gained from this expedition will inform  policy, management and stewardship of the deep sea, so that episodes of dumping toxic waste, such as this one, will not happen again”

During one of the dives to explore the DDT site, scientists discovered a whale fall, the seafloor location where the remains of a whale come to
rest. Scientists also identified a new area of methane seepage. Marine biologists consider both areas a focus of specialized research because of the unique habitat they create.

“Establishing ecological baselines in the deep sea allows us to track changes over time and better understand the consequences of human actions,” said Chief Scientist Dr. Lisa Levin, a professor of biological oceanography at Scripps Institution of Oceanography. “The DDT dump site provides evidence of a large human footprint in the deep ocean, but we are just starting to identify the effects on local marine communities.”

The information the team collected at the DDT barrel disposal site will be compared to animals and microbes at more distant sites in order to assess the current concentrations and effects of DDT in the region. The samples will return to Scripps Institution of Oceanography where scientists will conduct further analysis and DNA sequencing.