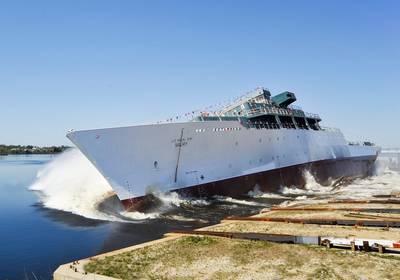 Construction began in September 2010, the keel laying ceremony was held in February 2011, and delivery is expected in January 2014.

The vessel has an additional 24 feet in length to the previous T-AGS 60 design which will accommodate a moon pool for deployment and retrieval of autonomous underwater vehicles.

Designed to perform acoustic, biological, physical and geophysical surveys, T-AGS 66 will provide the U.S. military with essential information on the ocean environment.

The ship’s sponsor is the Honorable Lisa P. Jackson, former Administrator of the Environmental Protection Agency (EPA), who as Administrator focused much of her efforts on the BP oil spill that ravaged the Gulf Coast area.

T-AGS 66 was named in honor of Cmdr. Matthew Fontaine Maury, nicknamed “Pathfinder of the Seas,” and also known as the “Father of Modern Oceanography.”

The vessel is 353 feet in length with an overall beam of 58 feet, and will be operating under the Military Sealift Command.