As OceanX’s new flagship, she is equipped with a series of submersibles, sonar arrays, manned submarines, an ROV and AUV, giving full capability to explore and map the depths of the oceans.

OceanXplorer’s research facilities are paired with Hollywood quality filming and media studios – developed in partnership with renowned filmmaker James Cameron. With this, the vessel’s findings can be live-streamed to audiences worldwide at the exact moment of discovery.

Damen served as main contractor for the complex rebuild project, an extensive scope of work that brought together various disciplines from across Damen Shipyards Group – including offshore and survey newbuild, repair & conversion and yachting.

The project required Damen to rebuild the vessel – a former offshore survey ship – in essence from the main deck upwards by stripping the existing accommodation and adding a complete new and much larger accommodation to house the new laboratories, workshops and submarine hangar.

Also  a fully integrated heli hangar was added to the superstructure as well as extensions on both sides of the accommodation decks to house new cabins over the (increased) full beam of the vessel. Following the structural part, the work included overseeing the complete integration of all ship’s systems including specialist hydrographic and laboratory systems and an innovative IT infrastructure to facilitate the combination of state-of-the-art research facilities with the on board Hollywood standard cinematography and media studios.

The ship is unique in its combining of up-to-the-minute research facilities – courtesy of renowned naval architects Skipsteknisk – and top-of-the-line interior accommodations, designed by Christina Fallah. The vessel’s additional interiors as well as its exterior were styled by Steve Gresham.

The project also required Damen to undertake a docking scope, including removal and refurbishment of azipull and bow thrusters, blasting and coating of tanks and complete overhaul and upgrading of crew accommodation. 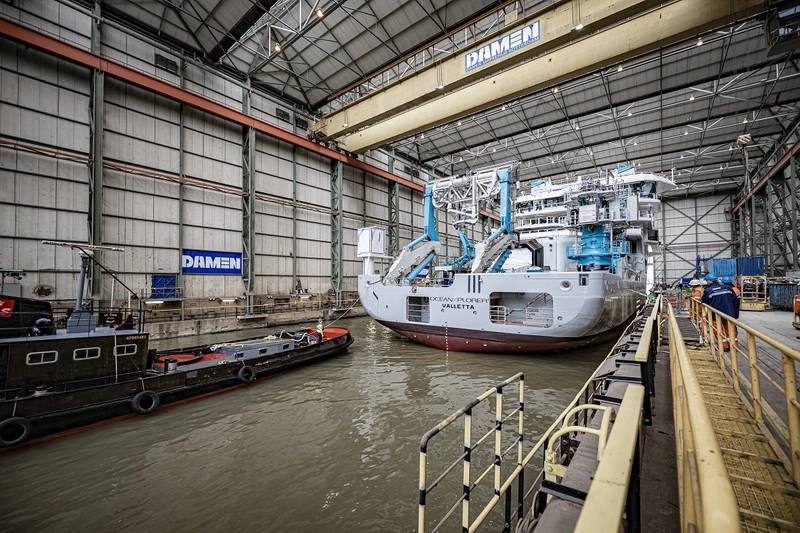