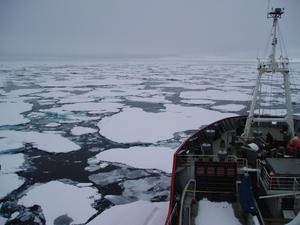 In 2015, researchers at the National Oceanography Center (NOC) used Royal Navy submarine data to investigate the nature of turbulence in the ocean beneath the Arctic sea-ice. This is mainly because recent decreases in Arctic sea ice may have a big impact on the circulation, chemistry and biology of the Arctic Ocean, because of ice-free waters becoming more turbulent.

By revealing more about how these turbulent motions distribute energy within the ocean, the findings from this study provide information important for accurate predictions of the future of the Arctic Ocean. The melting of Arctic sea-ice is expected to be accelerated as the cold, fresh layer of water just beneath the ice mixes with a relatively warm, salty layer below it. This mixing is caused by turbulent motions, such as internal waves and eddy currents, which are likely to increase as the sea-ice thins and breaks up, causing a positive feedback effect.

The study as published in the Journal of Geophysical Research Letters, identified differences in how energy is distributed by turbulent motions in the Arctic when compared to open, ice-free seas. The findings also showed that the turbulence was very similar in Arctic regions with high and low amounts of sea-ice. This suggests that the turbulence in the Arctic is therefore altered by the way sea-ice affects the structure and stability of the water column, rather than just by the ice acting as a lid protecting the ocean from the wind.
Marine Technology Reporter has been commissioned to publish the Official “Oceanology International 50th Anniversary Edition” which will distribute with the MARCH 2020 edition of MTR. For information on advertising in this edition, contact Rob Howard @ howard@marinelink.com, t: +1 561-732-4368; or Mike Kozlowski @ kozlowski@marinelink.com, +1-561-733-2477.
• Arctic Ocean • Arctic sea • energy