When Phil Parisi boarded the research vessel Atlantis this summer for an expedition to the Puerto Rico Trench, he didn't quite know what to expect. Parisi, who is pursuing a master's degree in ocean engineering at the University of Rhode Island, joined URI Professor Christopher Roman and a team of scientists from the Woods Hole Oceanographic Institution for his first deep-sea research experience.

"I was in awe of the massive operation it took to do science in the open ocean," said Parisi. "It was incredible to see the life that exists in the deepest parts of the ocean. It’s fun learning about the wild creatures that survive down there, yet surprising how little we know about them."

The main purpose for the trip was to employ the deep autonomous profiler, which is an untethered deep-sea lander platform that can travel thousands of meters through the water column, land on the seafloor, then release its weights and rise to the surface, operating autonomously for hours.

Assembled in Roman’s lab in 2018, the profiler saw its third set of dives in the Puerto Rico Trench this trip, marking its fifth overall deployment. On this occasion, the deep autonomous profiler went deeper than it did previously, reaching the seafloor at a depth of 7,960 meters.

Parisi's role was to ensure smooth operations of the system's hardware, while Roman managed the software side.

"I would test the communications with acoustic releases, rig up drop weights, arm Niskin bottles, and power the electrical systems on and off," said Parisi, who is from Naperville, Illinois. "We also added a downward-facing camera and bait to record deep-sea life in action. I reviewed the footage and passed it on to interested researchers on board. There were hundreds of amphipods, a handful of decapods, one isopod, and a pair of cusk eels."

Parisi earned his bachelor's degree in mechanical engineering from Marquette University in Milwaukee. After taking a year off, he decided to continue his education at URI. "I really wanted to work with autonomous systems and still be able to interact with nature," said Parisi. "Ocean
engineering ticked my boxes and URI maintains a solid reputation for oceanic research."

The exhibition to the Puerto Rico Trench provided Parisi with the hands-on experience he wanted. "I gained insights into the development and operation of autonomous systems, which is my area of focus in graduate school," said Parisi. "Field testing never goes as expected and we often have to adapt to unexpected new challenges as they present themselves." 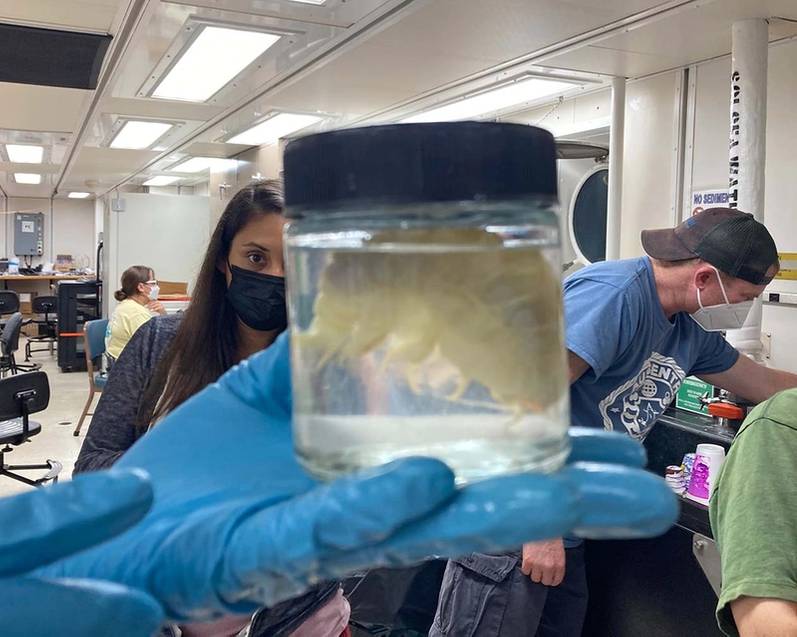 A giant amphipod was retrieved from the Puerto Rico Trench and brought back to the lab. Photo by Phil Parisi.