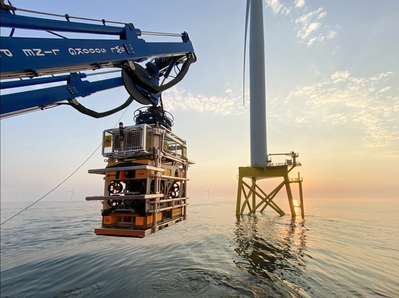 Rovco, a UK-based provider of ROV and hydrographic services has completed the first stage of its long-term contract awarded by CWind for its annual subsea balance of plant (BOP) and cable inspection works at East Anglia ONE offshore windfarm in the UK.

The East Anglia ONE offshore wind farm, with the capacity to produce 714MW of electricity, first delivered power to the UK grid in early September 2019. All 102 turbines are now installed and the wind farm was fully commissioned in July 2020

CWind, part of the Global Marine Group, was awarded a multi-year framework from ScottishPower Renewables and Macquarie's Green Investment Group to manage the subsea inspection services, including subsea maintenance, surveys and corrective maintenance planning, as well as pre-engineering studies at the offshore wind farm.

Rovco, led by CWind, began work in July 2020 – using a combination of DPII SOV with its Seaeye Leopard Work-Class ROV onboard, to carry out inspection works on nominated subsea structures and a Survey Vessel solution for multibeam and side scan work along the Array and Export Cable routes. This work assisted in notifying the condition of the operational windfarm to allow informed maintenance planning as required based on the results of the surveys, Rovco said.

Oslo-listed seismic surveyor Polarcus has defaulted on its bank loans and bonds, it said on Tuesday, sending the company's…