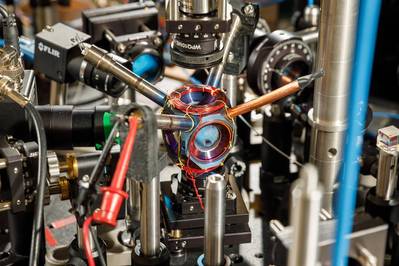 A compact device designed and built at Sandia National Laboratories could become a pivotal component of next-generation navigation systems. (Photo by Bret Latter)

Don’t let the titanium metal walls or the sapphire windows fool you. It’s what’s on the inside of this small, curious device that could someday kick off a new era of navigation.

For more than a year, the avocado-sized vacuum chamber has contained a cloud of atoms at the right conditions for precise navigational measurements. It is the first device that is small, energy-efficient and reliable enough to potentially move quantum sensors — sensors that use quantum mechanics to outperform conventional technologies — from the lab into commercial use, said Sandia National Laboratories scientist Peter Schwindt.

Sandia developed the chamber as a core technology for future navigation systems that don’t rely on GPS satellites, he said. It was described earlier this year in the journal AVS Quantum Science.

Countless devices around the world use GPS for wayfinding. It’s possible because atomic clocks, which are known for extremely accurate timekeeping, hold the network of satellites perfectly in sync.

But GPS signals can be jammed or spoofed, potentially disabling navigation systems on commercial and military vehicles alike, Schwindt said.

So instead of relying on satellites, Schwindt said future vehicles might keep track of their own position. They could do that with on-board devices as accurate as atomic clocks, but that measure acceleration and rotation by shining lasers into small clouds of rubidium gas like the one Sandia has contained. 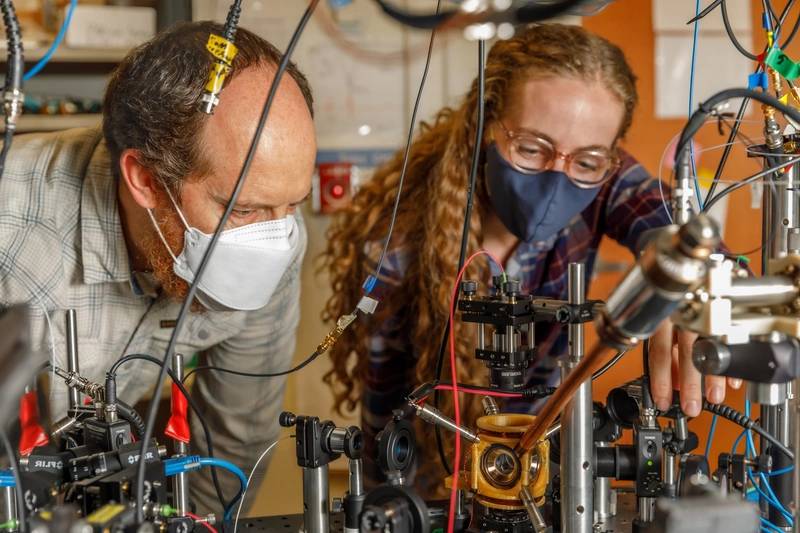 Atomic accelerometers and gyroscopes already exist, but they’re too bulky and power-hungry to use in an airplane’s navigation system. That’s because they need a large vacuum system to work, one that needs thousands of volts of electricity.

“Quantum sensors are a growing field, and there are lots of applications you can demonstrate in the lab,” said Sandia postdoctoral scientist Bethany Little, who is contributing to the research. “But when you move it into the real world there are lots of problems you have to solve. Two are making the sensor compact and rugged. The physics takes place all in a cubic centimeter (0.06 cubic inches) of volume, so anything larger than that is wasted space.”

Little said her team has shown that quantum sensing can work without a high-powered vacuum system. This shrinks the package to a practical size without sacrificing reliability.

Instead of a powered vacuum pump, which whisks away molecules that leak in and wreck measurements, a pair of devices called getters use chemical reactions to bind intruders. The getters are each about the size of a pencil eraser so they can be tucked inside two narrow tubes sticking out of the titanium package. They also work without a power source.

To further keep out contaminants, Schwindt partnered with Sandia materials scientists to build the chamber out of titanium and sapphire. These materials are especially good at blocking out gasses like helium, which can squeeze through stainless steel and Pyrex glass. Funding was provided by Sandia’s Laboratory Directed Research and Development program.

Construction took sophisticated fabrication techniques that Sandia has honed to bond advanced materials for nuclear weapons components. And like a nuclear weapon, the titanium chamber must work reliably for years.

The Sandia team is continuing to monitor the device. Their goal is to keep it sealed and operational for five years, an important milestone toward showing the technology is ready to be fielded. In the meantime, they’re exploring ways to streamline manufacturing. (Source: Sandia National Laboratories)