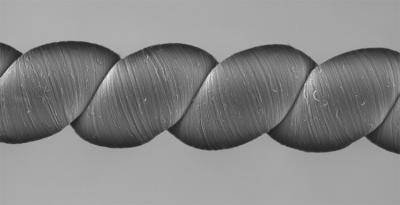 A new, high-tech yarn that generates electricity when stretched or twisted could use ocean waves and human motion to lower man's dependency on fossil fuels, researchers said on Thursday.
An international team of scientists said in a study they had developed a stretchy yarn made of carbon nanotubes - tiny strands of carbon atoms up to 10,000 times smaller than a hair - that produces electricity from a host of natural sources.
"The easiest way to think of twistron harvesters is, you have a piece of yarn, you stretch it, and out comes electricity," said Carter Haines, a lead author of the study published in the journal Science.
The device, which exploits the ability of nanotubes to transfer spring-like motion into electrical energy, has numerous possible applications, according to the paper.
In the lab, tests showed that a yarn weighing less than a housefly could light up a small LED light.
When sewed into a t-shirt, it could power breathing sensors - like those used to monitor babies - using the stretch caused by the chest expanding at every inhalation.
The innovation could be used to power internet-connected devices and smart clothing, said the study's senior author Ray Baughman, a professor at The University of Texas at Dallas.
"Electronic textiles are of major commercial interest, but how are you going to power them," Baughman said in a statement. "Harvesting electrical energy from human motion is one strategy for eliminating the need for batteries," he said.
But the twistron's most compelling feature was the ability to operate in sea water and potentially harvest vast amounts of energy from the ocean, he added.
"The grander dream is to make a real difference in the energy economy of nations," Baughman told the Thomson Reuters Foundation by phone.
A trial in South Korea showed that a small twistron attached between a buoy and a sinker on the seabed produced electricity every time a passing wave pulled the yarn.
Baughman said that the technique could be scaled up in the future to create sea-power stations that can light entire cities, though harvesters are currently too expansive.
Under the Paris accord reached in 2015, rich and poor countries committed to reducing emissions of greenhouse gases generated by burning fossil fuels that are blamed by scientists for warming the planet.
(Reporting by Umberto Bacchi, Editing by Lyndsay Griffiths. Thomson Reuters Foundation)
• electrical energy • electricity • energy