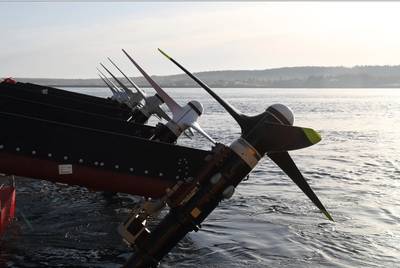 The key component, manufactured by propulsion expert SCHOTTEL, forms the ‘powerhouse’ of Sustainable Marine’s pioneering floating tidal turbine, converting torque - or rotation of the blades - into electricity, the company said.

"The ‘accelerated lifetime testing’ was successfully completed in a 6-month period, replicating five years of operation in the Minas Passage, Bay of Fundy, Nova Scotia, Canada – home to the highest tides on earth," Sustainable Marine said.

The site will play host to Sustainable Marine’s Pempa’q Project involving the world’s first floating tidal energy array, delivering up to 9MW of energy to Nova Scotia’s grid, powering around 3,000 homes per year.

A tailor-made test rig was built within the University’s Center for Wind Power Drives (CWD), to test the drivetrain. It formed part of the “OsT” project, led by SCHOTTEL Hydro and funded by the German Federal Ministry for Economic Affairs and Energy (FKZ 03EE4001A).

“Our latest testing project with Aachen University marks another significant step forward for our tidal energy technology and the broader Pempa’q Project,” said Ralf Starzmann, Vice President of Business Development at Sustainable Marine. “The durability and survivability of our platforms is paramount alongside their energy generating capacity at competitive costs. It was particularly important to prove the drivetrain could withstand five years of operation at the Minas Passage site, with this being the planned maintenance interval period. Rigorous independent assessments with world-class institutes like Aachen University play a key role providing credibility and confidence in the technology.”

As part of the test procedure, a total of four independent hydraulic cylinders were used to apply simultaneous testing involving multiple load components. Further, a 125 kW motor was used to substitute the torque generated by the rotor.

Following 2467 hours on the test rig, 152MWh of electrical energy was fed back by the drivetrain, equating to around one year’s electricity supply for 50 German homes. Post testing the drivetrain was decommissioned and subjected to a thorough inspection, Sustainable Marine said.

“The test program was divided into two main sequences,” said Dennis Bosse, Managing Director at the Center for Wind Power Drives. “The first period focused on the rotating components, including the bearings and gearbox, where fatigue damage is caused by constant loads, involving torque, thrust as well as transverse force and bending moments were applied.

"During this period the drivetrain ran for 1800 hours at rated power. The second period focused on the static components including the drivetrain housing where fatigue damage is caused by variation of the loads. Components oscillated simultaneously with multiple combinations and load amplitudes. Ultimately, the testing proved that the SIT250 drivetrain is capable of withstanding the significant challenges posed by the FORCE Test Site in the Bay of Fundy.”

CGG on Tuesday announced a multi-year global data transformation and curation agreement with supermajor bp, that will play…