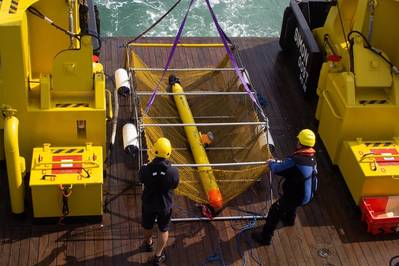 Teledyne Gavia announced that after an international tender it has completed the sale and recent sea acceptance testing of an autonomous underwater vehicle (AUV) to the Flanders Marine Institute (VLIZ) in Oostende, Belgium.

The VLIZ Gavia is rated to 1,000m depth in a low logistics form factor and includes an array of scientific instruments to meet current and future VLIZ research requirements. The modular nature of the GAVIA AUV allows sensors to be added as mission requirements dictate. The VLIZ Gavia is configured for diverse research applications and includes an iXblue INS coupled with a Teledyne RD Instruments Pathfinder ADCP up/down for highly accurate navigation and current profiling, Klein 3500 side scan with bathymetry, camera system, Gavia Science Bay module housing an iXblue GAPS transponder for use with an existing VLIZ owned USBL system, Aandera dissolved oxygen, Wetlabs ECO puck, and RBR CTD. A SUNA nitrate sensor and Pro-Oceanus Mini CO2 are mounted externally as required. A Gavia Portable Launch and Recovery cage was also supplied for safer LARS procedures with a nose recovery system.

Wieter Boone, Head of the VLIZ  Marine Robotics Center said, “We were looking for a versatile system, to operate both in shallow and deep areas. The Gavia stood out as low logistic solution with large selection of sensor options. The addition of the Gavia AUV will significantly increase the operational capabilities of the center in scientific campaigns and in collaborative projects with partners from the blue economy. “

The Gavia AUV is an autonomous sensor platform that is user configurable by the addition of one or more sensor, navigation, or battery modules utilizing a unique twist lock system. The Gavia is a fully low logistics modular system designed to be operated from vessels of opportunity and has the greatest depth rating of any vehicle in its class.