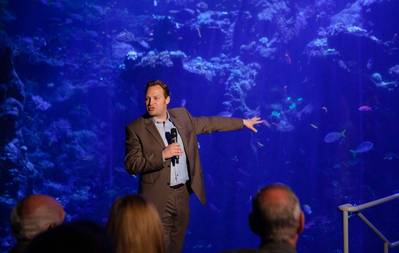 Down from 77 initial entrants to 18, a diverse group of competitors vie for the Wendy Schmidt Ocean Health XPRIXE’s $2 million cash purse.

Nonprofit organization XPRIZE, which creates and manages large-scale, high-profile competitions that aim to stimulate research and development solutions to grand problems across a number of scientific fields, announced in September that 18 team were selected to advance for a chance at $2 million in prizes through a global competition to create pH sensor technology that will affordably and accurately measure ocean acidification.

The teams participating in the Wendy Schmidt Ocean Health XPRIZE are competing for two separate prize purses: the $1 million accuracy purse, based on performance, and the $1 million affordability purse based on cost and usability.

According to XPRIZE, the oceans absorb about one quarter of CO2 that humans release into the atmosphere, causing changes in water chemistry and increases in ocean acidity. “Ocean acidity is a serious threat we are only beginning to understand,” said ocean philanthropist Wendy Schmidt. “It could have significant ecological and societal implications, changing the health of entire ecosystems, affecting the global economy and the biodiversity of the planet.”

The competition’s goal is to ultimately catalyze responses to the pressing changes in ocean acidity by propelling the development of superior ocean pH sensor technology. “There are pH sensors available, but there are very few available options, many of which are too costly, imprecise and/or unstable to allow for sufficient knowledge on the state of ocean acidification,” said Paul Bunje, XPRIZE’s Senior Director of Oceans. “In particular, it has been difficult to measure pH with ease and accuracy in the coastal and deep ocean environments.”

The 18 best entrants have been chose from a diverse pool of contestants which spans all corners of the globe. Each team has submitted its sensor for a rigorous three-month test in controlled laboratory conditions focused on accuracy, precision and stability. The top submissions will move on to testing in a coastal environment in February 2015, followed by deep-sea testing in May 2015, with the winners announced shortly thereafter.

Bunje said, “The wide range of technologies submitted for the Wendy Schmidt Ocean Health XPRIZE is really exciting, especially the nontraditional approaches. Many teams are using new methods and materials, such as nanotechnology, while others are adapting techniques commonly used in other industries.”

“It will certainly make for a heated race towards the finish line,” Bunje added.

The 18 teams in contention are as follows:
•ANB Sensors (Cambridge, England), a team of scientists and researchers from the Schlumberger Gould Research Center with expertise in lasers, chemistry, fluid mechanics and geophysics.
•Angel Sharks (Thousand Oaks, Calif.), a team of students, educators and entrepreneurs with expertise in Artificial Intelligence research and development.
•Blue Devil Ocean Engineering (Beaufort, N.C.), a team of faculty and students from the Pratt School of Engineering and the Nicholas School of the Environment at Duke University.
•Blue Praxis (Denver, Colo.), a team comprised of multi-disciplinary representatives, including a software engineer and a biology student from Metropolitan State University.
•Boardformula (San Diego, Calif.), a team led by the founder of Boadformula, an engineering consultancy for research and development in the surf industry.
•Cross Strait Team (Hangzhou, China), a team of chemists, oceanographers and engineers from Zhejiang University, Hangzhou Dianzi University and National Sun Yat-sen University.
•HpHS (Yokosuka, Japan), a team of research scientists and engineers from the Kimoto Electric Co., Ltd. and the Japan Agency for Marine-Earth Science and Technology.
•NanoInnovations (Sugar Land, Texas), a team led by the founder of NanoInnovations, a company with expertise in the development of sensors for ocean exploration.
•National Oceanography Center UK (Southampton, England), a team of scientists and engineers from the National Oceanography Centre, a leading marine science research and technology institution.
•Optode Team Austria (Graz, Austria), a team comprised of students and scientists from the Institute of Analytical Chemistry and Food Chemistry at the Graz University of Technology.
•OSU FABE Sastry lab (Columbus, Ohio), a team of scientists and engineers from Ohio State University’s Department of Food, Agricultural and Biological Engineering.
•pHFine Scale (Seaside, Calif.), a team of teenagers and young adults with expertise in designing and manufacturing pH instruments used off the coast of Australia at the Great Barrier Reef.
•Sunburst Sensors (Missoula, Mont.), a team led by the founders of Sunburst Sensor, a company focused on the development of chemical sensors for marine and freshwater applications.
•Team Durafet (Plymouth, Minn.), a team comprised of representatives from Sea-Bird Scientific, the Monterey Bay Aquarium Research Institute, Scripps Institution of Oceanography at the University of California San Diego and Honeywell Aerospace’s Advanced Technology group.
•Team Fluidion (Paris, France), a team from technology start-up fluidion, a company with expertise in micro and nanotechnologies, deep-water operations and engineering of sensors for extreme environments.
•TEAM SEAS (St. Petersburg, Fla.), a team of scientists and engineers from SRI International, the University of South Florida and the Battelle Memorial Institute.
•Team SINDEN (Fukuoka, Japan), a team of faculty, scientists and engineers from Kyushu University’s International Institute for Carbon-Neutral Energy Research, the Kyushu Institute of Technology, the University of Tokyo and the Japan Agency for Marine-Earth Science and Technology.
•Team XYLEM (Beverly, Mass.), a team representing two Xylem companies, Aanderaa Data Instruments in Norway and YSI out of Ohio, with extensive work in commercializing high performance and reliable optical chemical sensors used in oceanography.