Pe and Dive Teams Gear Up for Underwater Search 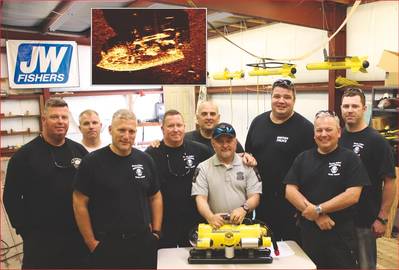 Every year, the city of Boston, Massachusetts hosts several major events which bring in millions of people. The police department’s Special Operations Division plans for, and responds to, major emergencies that happen during these events, as well as natural or man-made disasters. The division maintains a number of support units complete with specialized equipment and, since the city includes 41 square miles of water, much of it is designed for the marine environment. When it comes to Boston Harbor; as many criminals have discovered...what goes in, will come out, and it’s usually the Boston Police Department bringing the evidence to the surface.

To assist in these operations the division has acquired JW Fishers SeaLion-2 ROV. The highly maneuverable remote controlled underwater vehicle is equipped with four high resolution color cameras, can descend to depths up to 1,000 feet, and operate in currents up to 4 knots. The ROV is also equipped with a scanning sonar which allows the operator to see a 400 foot diameter area around the vehicle, regardless of water clarity, an essential feature when working in the murky harbor. The SeaLion can check ship hulls for drugs or contraband, inspect underwater structures for explosives, search for drowning victims and locate weapons and other evidence disposed of in the city’s waterways.

The town of Tafton in Pennsylvania’s Pocono Mountains is bordered by Lake Waleenpaupack, the state’s third largest lake covering more than 5,700 acres. Naturally it draws a large tourist crowd in the summer months. To better respond in emergencies, the Tafton Fire Company put together a Water Rescue Team with specially trained members equipped to deal with incidents involving open water, swift water, and rapid deployment search-rescue/recovery. In addition to some advanced diving equipment, the team also secured a high tech sonar system, JW Fishers SSS-600K side scan. Team member Jon Tandy said, “If there are no eyewitnesses, or the eyewitnesses can not accurately identify the place where the victim or object was last seen, the size of the prospective area can be so large as to make it impossible to effectively cover with divers. The side scan sonar increases the speed of searching the big lake’s murky water by a factor of 60, or around 30 acres an hour, as opposed to less than half an acre and hour by a diver.” The sonar proved instrumental when looking for a sunken boat that divers had attempted to find for three days. Tandy reported it took only eight minutes to locate the vessel using their side scan.

Benton County and Baxter County Sheriff’s Departments in Arkansas both have dive teams employing JW Fishers TOV-1 towed video system in their search operations. The advantage of the TOV-1 is its ability to stay submerged all day and night, and it can be towed to depths greater than public safety divers are allowed to descend. Baxter County’s Lt. Rick Lucy reports the TOV-1 has been used extensively in their search operations and has helped locate several drowning victims. Benton County’s Deputy Doug Gay says their video system has saved many hours of dive time and increases safety when the camera is put down in areas where it is difficult or dangerous to deploy divers.