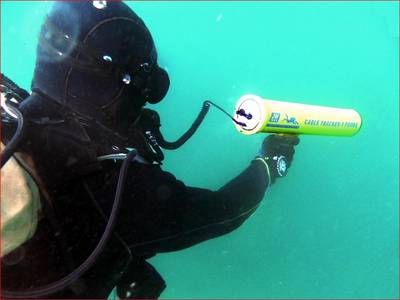 Utility companies have been laying pipes and cables across the ocean floor for more than a century. Prior to the introduction of GPS, marking their location was difficult, and position information was often erroneous. It is extremely important to know where existing lines lie before undertaking dredging operations or when new pipes and cables are laid down.

Regulations require they be buried from several feet to several meters under the bottom to prevent snagging by anchors and fishing trawls.This depth of burial makes it impossible to find them with conventional metal detectors as they are often beyond the device’s detection range. Two pieces of equipment that have proved most effective are the pinpointing magnetometer and the cable tracker. The pinpointing magnetometer is a very sensitive instrument that locates iron and steel pipes buried up to 16 feet in the bottom, and the cable tracker can detect a buried power or communications cable at a distance of more than 30 feet.

One company successfully using the cable tracker is Telkom South Africa. Recently the company was contracted to perform service on the East Africa Submarine Cable System (EASSy), a 10,000 kilometer submarine cable deployed along the east and south coast of Africa.  The undersea fiber optic cable is the highest capacity system carrying voice, data, video, and internet between sub-Saharan Africa and Europe / North America. Verne Steyn, Chairman of EASSy’s Terminal Party Work Group reports, “We purchased JW Fishers CT-1 cable tracking system to assist with locating our cable at Mtunzini near Durban in South Africa. The water visibility is near zero and annual surveys must be performed on the section that runs from a depth of 30 meters to the shoreline. The CT-1 enabled us to quickly and easily find the cable whereas previous dives had been aborted due to the poor visibility, which is expensive for the consortium. We also use the CT-1 to ensure the 25 Hz tone leaving the cable station can be found on the beach, confirming the cable is in good health up to this point. I then report to the offshore repair vessel we are confident the tone is leaving shore, which helps reduce fault finding time, in turn saving us money.”

Another company with a wealth of experience in submarine cables is LD TravOcean. For more than 35 years the firm has been laying power and telecommunications cables under the ocean floor for the oil and gas industries, and more recently the offshore windfarm market. LD TravOcean is capable of burying cables of all types to depths up to 3 meters using trenchers, vibro-ploughs, high pressure water jets, and dredging tools. The company has successfully completed a number of high profile projects including laying 4 kilometers of cable for a tidal power plant near Paimpol, France and putting down 51 infield power cables in 50 meters of water for the Walney Windfarm in the Irish Sea. In addition to installations, TravOcean also provides submarine power cable repair as they did at Delma Island in the United Arab Emirates. One of the essential tools used in these operations is Fishers PT-1 pinpointing magnetometer. This highly sensitive detector of iron and steel objects is capable of detecting the steel armor used on many cables at depths up to 3 meters. A key advantage of the instrument is its ability to pinpoint the location of individual lines even when in close proximity to other cables.

Japan based NTT-WE Marine is also deep in the business of undersea cables. They assist in all aspects of a project from design and construction to permitting, negotiation with fishermen’s unions, route surveys, installations and burial. In addition NTT-WE offers a variety of maintenance services to meet their customer’s needs. When a line goes down; the location, environment, and nature of the failure are all determining factors in deciding the best way to fix it. In water depths greater than 20 meters, repairs are typically carried out on board the cable laying vessel. Before the line can be lifted onto the deck where repairs are more quickly and easily completed, it must first be located by a diver. The device NTT-WE relies on is Fishers CT-1 cable tracker. An audio alarm transmitted through an underwater earphone alerts the diver to the presence of the cable and a series of high intensity LEDs on the instrument’s control panel light up as he gets closer. Takayuki Tanaka, manager of the Marine Operations Department reports his divers like the CT-1 because it is rugged, reliable, and easy to operate.