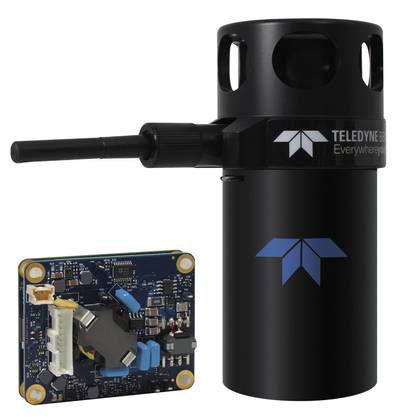 Teledyne Marine announced the launch of its new Ultra Compact Modem (UCM). At 60 by 50 millimeters, and weighing 55 grams, the OEM version of the UCM is the smallest acoustic modem ever designed by Teledyne Benthos.

The UCM is based on Teledyne Benthos’ signal processing technology to address the need for reliable wireless underwater acoustic communications onboard the growing number of autonomous micro vehicles and other subsea instruments. As the size of these micro vehicles continues to decrease, Teledyne Marine has responded with lightweight, low power, proven sensors and systems to expand the usefulness of these platforms, increasing the number of tasks they can perform, the manufacturer said.

The self-contained UCM is rated to 700 meters, though OEM versions are available with multiple remote transducer options for greater depths. Teledyne said the UCM boasts increased transmit power resulting in increased range and improved data reliability, as well as a decreased power draw, both of which are critical for autonomous vehicles and extended subsea instrumentation deployments.

As with Teledyne’s ATM series modems, the Ultra Compact Modem is compatible with the UTS-9400 Universal Top Side (UTS), and the soon to be launched CE marked UTS-9500 and is fully compatible with the NATO Janus underwater communication interoperability standard.