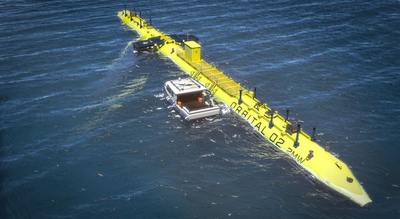 SKF has developed a power train for the world’s most powerful tidal turbine, capable of generating 2MW, being developed by Scotland-based Orbital Marine Power.

SKF has been supplying bearings and components to Orbital since 2011 but has now taken a further holistic step in its technical capacity, by developing the full power train system.

The O2 is made up of a 73m-long floating superstructure that will support two 1-MW turbines at each end. With rotor diameters of 20m, it will have a total rotor area of 600m2 – the largest ever on a single tidal turbine to date – and will be capable of powering more than 1,700 homes per year.

The turbine will feature 360° blade pitching, which will allow the safe, dynamic control of its rotors and will enable power to be captured from both tidal directions, eliminating the need to rotate the entire platform. These controllers will also support the installation of even larger blades on the turbine in future.