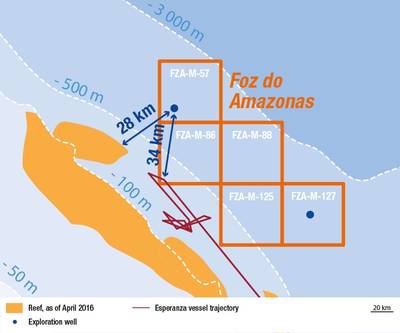 Total is determined to push ahead with its plans to drill for oil in the Amazon basin, it said on Friday as Greenpeace activists interrupted its annual general meeting in protest at the project.

The French oil major wants to explore Brazil's Foz do Amazonas basin, but Brazil's environmental agency rejected its licence application on Tuesday for a fourth time.

As the company's annual general meeting opened in Paris on Friday, four activists from Greenpeace descended by rope from the ceiling above the stage, unfurling banners reading "Let's save the Amazon's coral reef".

At least a dozen others managed to enter the hall, with some chaining themselves to fixtures in the room.

Total CEO Patrick Pouyanne told the meeting he would not cede to any kind of blackmail over the project, as the activists dangled on ropes above him.

"Our position on the Amazon project has not been abandoned. We have our rights and we have obviously to respect Brazilian laws," Pouyanne told shareholders.

"It is also clear that Brazil's environmental regulators are under immense pressure from other organisations. We are exchanging information with them."

Brazil's Foz do Amazonas basin could contain up to 14 billion barrels of oil, geologists estimate, or more than the entire proven reserves in the Gulf of Mexico.

Massive Coral Reef
A Greenpeace expedition in April documented coral in the area where Total plans to drill, after an earlier discovery of a massive coral reef nearby.

"Total refuses to listen to reason and persists in wanting to drill near this unique reef, at the risk of destroying it," Francois Chartier, head of Greenpeace's Oceans campaign, said in a statement.

Brazil's environmental agency requested more information from the company when it rejected its bid for an environmental license on Tuesday.

The Greenpeace activists were also protesting at Total's investment in offshore oil production blocks in French Guyana, which will boost its presence in the potentially lucrative Guyana basin.

Total faces more protests this month, after France's largest farmers' union called for a blockade of French oil refineries in protest at the company's decision to use imported palm oil at a new biofuel production site.